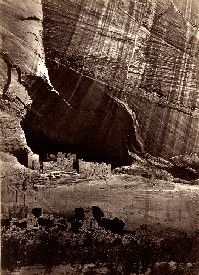 As part of the Navajo Wars, New Mexico District Military Governor, General James Henry Carleton, told 18 Navajo chiefs that they must surrender by July 20, 1863, and move to Fort Sumner, New Mexico at the Bosque Redondo. When the Indians refused, General Carleton ordered Colonel Kit Carson to begin a simultaneous campaign against the Mescelaro Apache and the Navajo. Carson soon began a series of raids and skirmishes amongst the tribes.

On January 12, 1864, Carson invaded the Navajo citadel of Canyon de Chelly, in present-day northern Arizona, attacking several Navajo with livestock, killing 11 of them and taking four captives, as well as a herd of sheep and goats. Over the next few days, a number of skirmishes were fought between the Indians and Carson’s forces. On January 16th, 150 starving Navajo surrendered and soon joined some 8,000 of their people in the tragic “Long Walk” across New Mexico to the Bosque Rendondo at Fort Sumner. 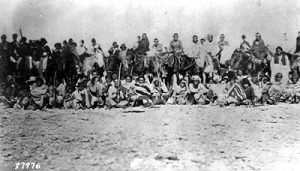 It was a successful operation for the United States Army and was the final major military engagement between the Navajo and the Americans.

In 1868, after four years of exile, the Navajo were allowed to return to their homeland. The site is operated by the National Park Service. The Visitor Center is three miles from Route 191 in Chinle, Arizona. 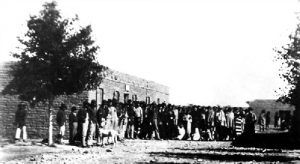