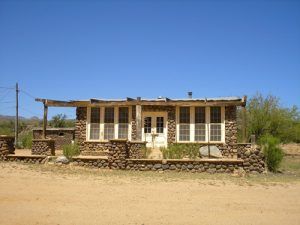 Unlike many of the other ghost towns in the area, Bumble Bee, Arizona was not a mining town – instead, it was once a flourishing stage stop on the Prescott-Phoenix stage line. Initially, the stop was known as Snyder’s Station, named for W.W. Snyder, who first settled the area.

Though the region was “infested” with hostile Indians, Snyder saw an opportunity in the creek that ran nearby and the lush pastures, where he could graze his horses and cattle. But the Indians were not happy with having white settlers in the area and began to attack several area ranches. Soon, The U.S. Cavalry sent in their troops to protect Snyder and the other area ranchers and prospectors.

Though small amounts of gold could be found in Bumble Bee, the vast majority was to be found in the neighboring camps, including Turkey Creek, Golden Turkey, Cleator, Gloriana, Gillette, the mineral-rich veins at Tip Top, and dozens of other small settlements. 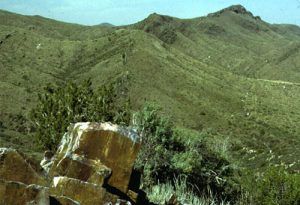 Though the original road through Bumble Bee was crude, it led to the mines, which the many prospectors were determined to reach. When a stage was established with a stop at Snyder’s ranch, Snyder built a small hostelry and stable to accommodate the travelers. Then, when gold was discovered in the adjacent Bradshaw Mountains, prospectors were crawling in nearby Bumble Bee Creek.

Soon, enough people had arrived in the area that a post office was established in February 1879, taking its name from nearby Bumble Bee Creek, so named because early travelers said that the Indians were as “thick as bumblebees.”

As the railroad pushed westward, it pushed the stagecoach out, and about the same time, the rich ores were diminishing in the area. Bumble Bee was destined to die. Its few remaining residents did everything to keep the town alive, moving the townsite three different times as new roads were surveyed. Finally, though the Black Canyon Highway bypassed it, it became a true ghost town.

In the mid-1930s, an attempt was made to bring Bumble Bee back to life by making it into a tourist attraction. Several new buildings were constructed, but the attraction never drew the tourists they hoped for.

Over the years, the property changed hands several times until the entire town was placed on the market and purchased in 1960 by newspaper king Charles A. Penn. Though Penn had plans to restore the town and build a museum, it never happened.

Time and weather have taken their toll on what little is left of the old ghost town, though several buildings continue to stand. The site is on private property, and some of the old buildings are occupied; however, photographs can be taken from the road. The businesses have long closed and have been left to the elements.