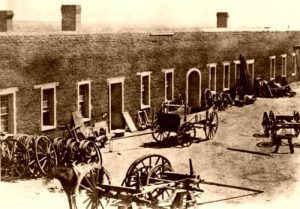 Years ago, when all beyond Missouri was a waste, the military post at Fort Union, New Mexico, was the only spot for miles around where any of the graces of social life could be discovered. Among the ladies at the post was a certain gay young woman, the sister-in-law of a captain, who enjoyed the variety and spice of adventure to be found there, and enjoyed, too, the homage that the young officers paid to her, for women who could be loved or liked were not many in that wild country. A young lieutenant proved especially susceptible to her charms and devoted himself to her in the hope that he should ultimately win her hand. His experience with the world was not large enough to enable him to distinguish between the womanly woman and the coquette.

One day messengers came dashing into the fort with news of an Apache outbreak, and a detachment was ordered out to chase and punish the marauding Indians.

The lieutenant was put in command of the expedition, but before starting he confided his love to the young woman, who not only acknowledged that she returned his affection, but promised that if the fortune of war deprived him of life she would never marry another. As he bade her good-bye he was heard to say, “That is well. Nobody else shall have you. I will come back and make my claim.”

In a few days, the detachment came back, but the lieutenant was missing. It was noticed that the bride-elect grieved but little for him, and nobody was surprised when she announced her intention of marrying a young man from the East. The wedding-day arrived. All was gayety at the post, and in the evening the mess-room was decorated for a ball. As the dance was in full swing a door flew open with a bang, letting in a draught of air that made the candles burn dim, and a strange cry, unlike that of any human creature, sounded through the house. 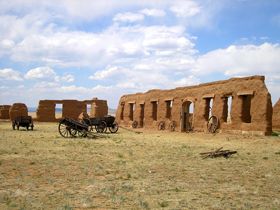 All eyes turned to the door. In it stood the swollen body of a dead man dressed in the stained uniform of an officer. The temple was marked by a hatchet-gash, the scalp was gone, the eyes were wide open and, burned with a terrible light.

Walking to the bride the body drew her from the arms of her husband, who, like the rest of the company, stood as in a trance, without the power of motion, and clasping her to its bosom began a waltz. The musicians, who afterward declared that they did not know what they were doing, struck up a demoniac dance, and the couple spun around and around, the woman growing paler and paler, until at last the fallen jaw and staring eyes showed that life was also extinct in her. The dead man allowed her to sink to the floor, stood over her for a moment, wrung his hands as he sounded his fearful cry again, then vanished through the door. A few days after, a troop of soldiers who had been to the scene of the Apache encounter returned with the body of the lieutenant.