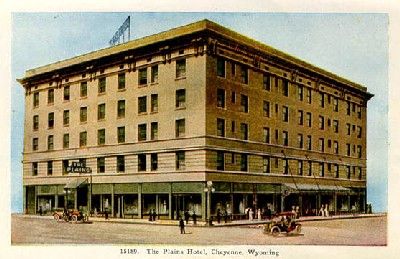 In the late 1800s the City of Cheyenne, Wyoming was called “The Magic City of the Plains,” so it was only appropriate when a luxurious hotel opened in 1911, it called itself the “Plains Hotel.” The concept of the elegant hotel was born at the annual $1 dinner of the Industrial Club (now the Chamber of Commerce) in December 1909.

In the midst of the meeting, Thomas Heaney, club President, interrupted the other discussions to give his opinion that Cheyenne was badly in need of a new and modern hotel. At the time, the main hotel in town was one called the Inter-Ocean which, over time had become outdated and had taken on more of a role as the city’s principal watering hole.

Though Heaney had said this in a somewhat joking fashion, the other men agreed and by February of the following year, the Cheyenne Securities Company was organized for the purpose of building a new hotel. Moving quickly, the hotel was designed by architect William Duboise and in March, a contract was awarded to build it. Construction started in June 1910 and in March 1911 it was completed at a cost of about $250,000, including furnishings.

On March 9, 1911, the hotel hosted an elaborate grand opening that was attended by men in full evening dress, gallant Army Officers, and a host of elegantly gowned ladies. As a band played until the wee hours of the morning, the guests danced and admired the magnificent appointments and furnishings of the new hotel, modern to the smallest detail.

The five-story hotel featured three elevators, 100 guest rooms, lush velvet carpets, fine furnishings, private baths, and telephones in the guest rooms, luxuries not seen in most hotels of the time. 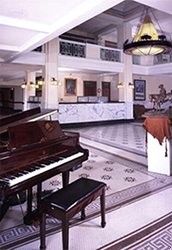 The lobby was lighted through a mission art panel skylight, decorated with heavy brass fixtures and leather furniture, and its floor was finished in tile and mahogany. The staircase leading from the lobby was made of solid marble and steel. The lobby bar gleamed with plate glass and mahogany fixtures. On the Mezzanine level, an orchestra entertained guests.

The hotel soon attracted numerous cattle barons, oil tycoons, and many travelers making their way to Yellowstone and the Grand Tetons. Guests raved about the amenities and services provided at the hotel.

Today, the Plains Hotel continues to cater to the many travelers of Cheyenne. Offering 130 fully restored guest rooms and suites, the rooms are furnished in an “Old West” style complete with original artwork and photography by Wyoming artists. Though maintaining its historic heritage, the hotel offers all the modern amenities that are expected of today’s travelers.