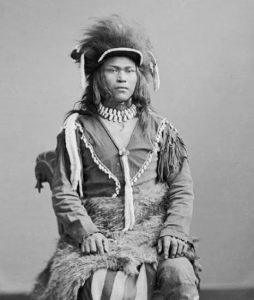 The Watlala people, also called the Cascade Indians, were a Chinookan tribe who lived at the Cascades of the Columbia River and the Willamette River in Oregon.

In 1805-06 Lewis and Clark estimated that they numbered about 2,800. As there were also other tribes who lived at or near the cascades and the people were very changeable due to the location being a popular fishing spot, it was impossible to identify them with certainty.

Several other known bands, which may have been the Watlala or later have been included under them, included the Cathlakaheckit, Cathlathlala, Cathlayackty, Clahclellah, Katlagakya, and Yehuh. In 1829, the Native Americans of the region suffered an epidemic which was called “ague fever,” of unknown nature, which killed in a single summer, some four-fifths of the population. Whole villages disappeared and those that were left were consolidated. After the epidemic, the Watlala seemed to have been the only remaining tribe, the remnants of the others having probably united under that name, though they were commonly called Cascade Indians by the whites.

In 1854 they were reported to number only 80 people, and in 1855 they joined in the Wasco Treaty under the name of the “Ki-gal-twal-la band of the Wascoes” and the “Dog River band of the Wasco,” and were removed to the Warm Springs Reservation in Oregon. Afterward, they were no longer enumerated separately and those that didn’t join the Wasco were thought to have joined the Wishram tribe.