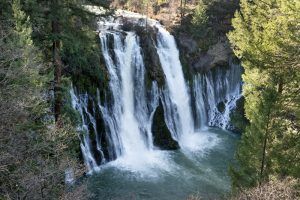 In the 1850s, several men from “back east” had come to the Golden State searching for their fortunes. While prospecting in Shasta County in northern California, they crossed the Sacramento River at Cow Creek about 2 ½ miles east of Fort Reading. From there, the prospectors followed another creek eastward for about 30 miles when they came upon a high waterfall. There, they found a rich gold deposit sitting above the waterfall. However, this was a dangerous time in the region as Indians, fed up with miners encroaching upon their lands, were often known to attack.

Taking from the gold deposit what they could carry, they soon fled in fear of the natives. Returning to Fort Reading, they asked for protection, but no troops could be spared. Soon, the men returned east from where they came.

Years later, in the 1870s, one of the men from this original group, along with his son-in-law, returned to the area in hopes of once again locating the waterfall. In Redding, he asked around about a creek with a high waterfall and was told there was one on Bear Creek near Inwood, some 25 miles to the southeast. The pair soon arrived in Inwood, telling their tale of the Lost Waterfall Mine and spending weeks exploring Bear Creek Canyon. However, after a long search, the two finally gave up and headed back east, never to be seen again.

Locals speculated that the country surrounding Inwood primarily made up of volcanic rock, thought it an unlikely site for gold to have been found. More likely, many believed that the gold might have been found on another waterfall on Clover Creek about three miles from Oak Run and 25 miles east of Redding.