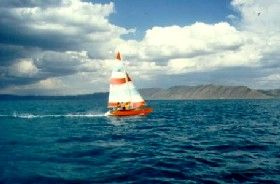 Straddling the Utah/Idaho border in the upper northeastern corner of Utah is beautiful Bear Lake.  In addition to its wonderful sporting opportunities for boaters, skiers, and fishermen, Bear Lake allegedly is called home to a sea monster.

Said to resemble a huge brown snake, nearly 90 feet long, the legend has been around from the days when only Indians inhabited this area.  When white settlers came to the valley, the Shoshone Indians inhabiting the area told of how the creature had often captured and carried away their people.  Their description of the animal sounded much like a large crocodile or a mythical dragon.

According to the many who have spied the serpent, it has a thin head, a largemouth, and small legs that it utilizes to move swiftly through the water.  The slithering snake like-creature has also been described as spouting water upwards from its mouth and moving so fast through the lake, that it leaves a wake behind, much like a boat.

Others have said they have seen the monster crawl up onto the beach with short flipper-like legs.  Once upon the sand, it holds its head high and turning it from side to side as it looks about.

Though many believe the monster to be nothing more than a legend, there has been some scientific research made into his actual existence. Findings theorize the creature could be a descendant of a dinosaur-like creature or sea lizard from the time when Lake Bonneville covered the entirety of this great basin.

In the summer of 1871, a local citizen was said to have actually captured a “young” member of the monster family near Fish Haven. This report evidently had some credibility as it was reported in the Salt Lake City Herald:

“This latter-day wonder is said to be about twenty feet in length, with a mouth sufficiently large to swallow a man without any difficulty, and is propelled through the water by the action of its tail and legs.”

The citizen, a fisherman, had actually set a large trap, made especially for the purpose of trying to capture one of the “beasts.” As to what happened to the captured creature, no one seems to know.

If the legend of the sea monster, itself, is not enough, another legend tells that even the mythical Pecos Bill, the “King” of tall tales, once wrested the sea monster, a fight that lasted for several days.

Does Bear Lake actually hold a sea monster? The debate rages on around the campfires, but in any event, an excursion to this beautiful lake, often called the Caribbean of the Rockies, will provide a great summer adventure.