In July, 1836 an old prospector named Adams staggered into the town of Pinos Altos, just north of Silver City, New Mexico. Bleeding from several gunshot and arrow wounds, the prospector rushed to a doctor. Lying on his death bed he told several friends who had gathered around him that he had been prospecting north of the town. His knapsack held a fortune in gold nuggets. After several weeks of prospecting he told of a red hill in the distance. When he arrived at the hill, he described gold lying everywhere.

While he was filling his knapsack with the gold nuggets, an arrow struck the gravel at his feet. Finding cover behind some rocks, he peered around to see about a dozen Indians.

Continuing to hide behind the rocks, the Indians fired gunshots and arrows at him in an attempt to dislodge him. Wounded several times, he stayed hidden until nightfall and finally the Indians withdrew. Carefully making his way back to Pinos Altos, he traveled through streams to cover his trail.

Just a few hours after reaching Pinos Altos, Adams died from his wounds and was buried in the town’s cemetery. When the gold in his knapsack was assayed, it was found to be worth over $7,000. 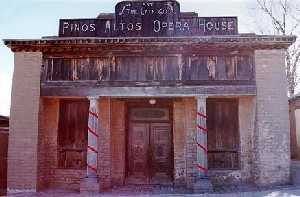 Word of the gold discovery quickly spread throughout the area and dozens of prospectors headed north in search of the red hill. However, no one ever reported finding the hill and its scattered gold.

Pinos Altos is located six miles north of Silver City on New Mexico Highway 15. This is not the same story of the Adams diggings as this episode happened more than 25 years earlier.