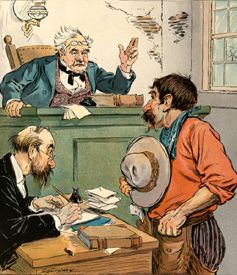 Out in Nye County, Nevada in years gone by there lived a gentleman of literary talent, whose contributions to the daily papers of this State, over the nom de plume of “Singleline,” gained for him an appreciative circle of readers and an enviable reputation long before his true name was known. He was industrious and frugal, and with a nice family in his rude home, soon commanded the consideration from his neighbors that his talents and native worth entitled him to. This led to his election as Justice of the Peace for his township in 1870, and he soon gained a reputation for dispensing even-handed justice to all, no matter what their financial condition was, and although he was a staunch Democrat, that did not prevent him from treating all alike, regardless of political affiliation.

About that time, a man named Harry Newton was conducting mining operations near him, and in his bluff manner, held a domineering sway over everybody brought in contact with him. This became very tiresome to his neighbors and led to a difficulty between him and Aleck McKay of the Blue Eagle Ranch, in which Harry made a threatening demonstration with his revolver. Aleck soon swore out a complaint, upon which the constable sought Harry and arrested him. An examination was set for the following day, and Harry was present to confront the complaining witness, who also had his wife present to give evidence in the case. The office of justice was in the front room of his ranch log house. He sat at a table, and in the cornerback of him was a shotgun, where it was always left after a hunting trip. The parties interested in the case sat on either side of the room, and as Harry was in ugly humor, it was not long before hot words were passing between him and Aleck, and as Harry made a movement to draw his pistol, Aleck reached for his wife’s satchel at her feet near him. Each was brought to a sudden halt when the Court said, “order gentlemen,” and a glance restored quiet, for the Justice had drawn a bead on them with the shotgun and had the drop on both. They sat down, and the Justice ordered the constable to disarm them, while he still covered them with the gun. Aleck said he had no gun, and when the constable assured himself of that, Harry gave up his, but very reluctantly.

Then the justice directed the constable to place the lady’s satchel on his table, and when it was done, he opened and found as he suspected, a large ivory-handled revolver in it, placed there for an emergency. After the Justice secured the guns, he laid the shotgun across the table and ordered the examination to proceed. It resulted in Harry being bound over, and the Justice informed him that he would fix the bail at $1,000. Harry replied a little sullenly that he would see everybody d—-d first and that when they wanted him at Belmont, the county seat, they could send for him. While he was saying this, the Justice was in the act of moving the shotgun from the table to its usual resting place but stopped to inform him resolutely that he must furnish the bond or he would send him at once to the county jail. Harry sat down and sent for a friend, and the bond was soon executed, “because,” as he said afterward, “he couldn’t refuse obeying the order of a court that was run with a shotgun.” 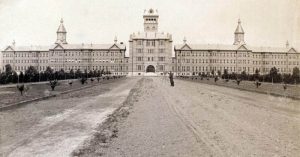 The resolute Justice, known as “Singleline” was Dr. J. W. Gally, later a resident of Watsonville, California, and one of the Directors of the Insane Asylum at Agnews, and during the building of it, the contractors learned that he was one they could not influence, and he was known and esteemed for his strict integrity and unquestioned honesty.

By William Daugherty, for the Reno Evening Gazette, March 25, 1891. Compiled and edited by Kathy Weiser/Legends of America, updated January 2021.