Loads of treasure are said to have been buried in southeast Arizona near an unknown peak that was once called Davis Mountain by the people who hid it there. This large cache was stolen from a smuggler train headed from Mexico. However, the original treasure was stolen from a bank vault in Monterey and a church in Matamoras, Mexico. The treasure included a cigar box full of diamonds, two statuary figures of pure gold — one of the Virgin Mary and one of Jesus, sacks of gold and silver, thirty-nine bars of solid gold bullion and several rawhide bags of ninety thousand Mexican dollars.

Fittingly, the bandit smuggler train was robbed by outlaws while traveling through Skeleton Canyon. After robbing the smuggler train, the outlaws buried the loot on what they called Davis Mountain. Although this mountain does not exist today on any Arizona map, one of the bandits gave intricate directions to the treasure before he died. Why these outlaws did not return for the treasure or what became of them is unknown.

The dying bandit’s directions were:

Head west across rolling plains to Davis Mountain, a bald, rounded granite dome visible for miles. With binoculars, it is said that you can see New Mexico from the peak of this mountain and old Sugar-Loaf can be seen standing boldly up against the sky.

Once you have arrived at Davis Mountain, continue west for 1 to 1 ½ miles, until you spot a canyon.  The east wall of the canyon has wooded hills, while the west wall is sheer rock precipice.

The creek that flows through this canyon plunges over a ledge in a small cataract approximately ten feet high and Silver Spring flows into the canyon on its west end. Near this spring is a tall juniper tree where, at its foot, is a grave marked by slabs of stone. Five hundred dollars in gold is allegedly buried in a tin can at the head of the grave. 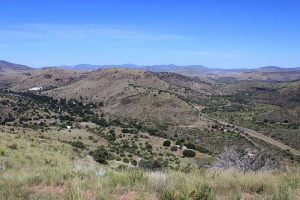 Up the canyon and south of Silver Springs, approximately 1 to 1 and 1/3 miles is Gum Spring. Between the two springs, lying in the scattered brush, are the remains of a burned-out wagon. This wagon is located on the west side of the canyon where it curves inward to form a shallow cove. At the deepest part of this cove lies a stone marker which is three feet high, squarely shaped, and one foot thick. On the east face of this marker is carved two crosses. After locating the stone, face Davis Mountain and step 20 paces. This is where the treasure is said to be buried.