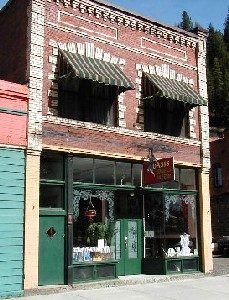 The Oasis Bordello Museum in Wallace, Idaho operated as a fully functional “real live” bordello until 1988, when its occupants left in a real hurry, abandoning their clothing, makeup, and toiletries. Even the dirty dishes were left in the sink as the “ladies” hustled out before the Feds raided the joint. Prior to that time, the Oasis, along with four other such brothels happily skipped along, providing their services, until a local politician was charged with going easy on law enforcement in North Idaho in exchange for campaign contributions.

At the time, each of the five businesses sported a neon sign advertising “rooms.” Some travelers were no doubt surprised to find that these rooms were not the type meant to “rest.”

The Oasis Bordello is in the Bi-Metallic Building which began its existence in 1895 as a hotel and saloon. When Wallace became the center of one of the world’s richest silver mining districts, men outnumbered the women nearly 200 to 1, and the building soon housed the Oasis.

Today the Oasis Bordello is a museum where they say a very “tasteful” tour is presented to its many visitors. Proprietress Michelle Mayfield shares information gleaned from the ladies’ hairdressers, local policemen, the establishment’s former bouncers, and maids, and even the ladies themselves. In a 20-minute glimpse into the past, the details of the presentation range from poignant to hilarious.

Entry to the Oasis gift shop on the main floor is free. The shop offers literature on women of the west, mementos from the Oasis’s days of operation, and lingerie from thong panties to flannel nightgowns. Robert Thomas Murals adorn the shop walls. The guided tour of the Oasis Rooms is on the second floor and is the main attraction, covering several other displays of interest, including a still and an old wine press in the basement.