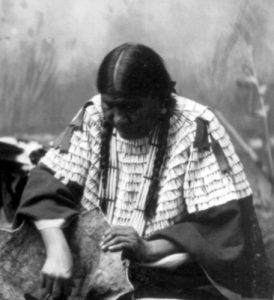 Long ago, an old woman gave her boy a present that he might become a medicine man. They were camping through the plains with nothing to eat, but roots and wild seeds. They were all hungry. The woman came to her son and said, “My boy, I am hungry. Have not you anything?” Go home, and to-morrow you will have plenty to eat,” her boy replied.

The next day her son began to make a corral close to the river. He gathered the men together and told them to drive in the antelope. They drove them in and killed them. After butchering, they carried the meat home with them. The next day he gathered the people again. They drove antelope into the corral and killed great numbers of them. They brought home the meat with them. The next day he gathered the men again. They drove in antelope and killed very many. They carried the meat home. The antelope ran in by themselves. If they whistled, they came running in as far as one could see. They killed a great many and carried home much meat which lay in a great pile. That evening, the old woman came to her boy and said, “That is enough, my wrists ache.” Then the boy quit. They cut the meat into slices to dry and tanned the hides.

The old woman came to her son and asked that he return her gift. “I have already given it to the supernatural one,” he told her. Then she cursed him. He left her and came to his own country. He came to a place called “sticks swim around”. There are tent poles sticking out of the water there. He lives on the bottom of the lake. The people all came after him but when they came back to their own country they could not find him. Then they commenced following his tracks. They saw where the tipi poles had been dragged into the water. They looked all around but could not find him.

Two years after, a large band of them went out on the plains to war. They traveled all night and all the next day. When it was evening they built a fire and smoked the pipe. They heard someone talking to them. “You must be my own people,” the voice said. 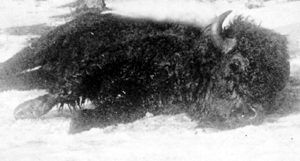 “Yes, we are your own people,” they replied. Then he dropped nearby them a big buffalo with its head just turned back and tied. “I started to carry this, but my breath gave out. For that reason, my people make smoke for me. I will smoke with you,” he said. Then they filled the pipe for him and smoked with him. “Where are you going?” he asked. “Here, after the enemy that we may bring back horses,” they replied. “Their camp is very close, but they are not aware of your approach,” he said, “you can go to them in the daytime. About noon, you will surround the horses. I want you to bring me the horse that is all black without a white spot.”

Then he gave them a forequarter of the buffalo he was carrying and they commenced to eat it. “If at any time you are in need, make a smoke for me. My home is at TcîcnaLeLîe, by Sheep Horn Mountain. If you want anything at any time, blow smoke towards that place.” The next day, in broad daylight, they came to the enemy, and about noon, they found the horses and surrounded them. When they started to drive them away they saw the black one with no white spots for which the supernatural one had asked. When they drove the horses this one kept along with the others. When they came to his home they stopped the horses and the black one ran immediately to the lake. They came back to their own country with the remainder of the band.

About the Author: Pliny Earle Goddard (1869-1928) was an ethnologist and linguist of American Indian languages. After college graduation he worked in a religious organization helping with a number of impoverished schools and eventually took a position as a missionary with the Women’s Indian Aid Association. Deciding to make ethnology his life’s work, he continued his studies, gaining a Ph.D. in linguistics. During his lifetime, he published a number of books and journals including several volumes entitled the Anthropological Papers of the American Museum of Natural History. This tale comes from his Jicarilla Apache texts, from Volume VIII of that series, published in 1911.