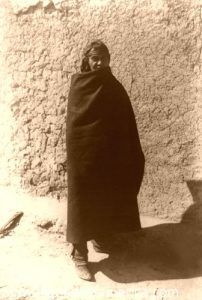 An Apache was very poor and went about among the Pueblo Indians picking up the food they threw away. That was all he had to eat.

Over by the river, there was an eagle nest on top of a sheer cliff. The Pueblo Indians treated the Apache well giving him plenty of food. He went with them to the eagle’s nest. They tied a rope to him and lowered him down where the two little eagles were sitting. He took off the rope and stayed there with the eagles. Those above pulled up the rope just by itself. In vain, they let down the rope to him. He remained with the eagles. The others left him and went away. They came back again and let down the rope in vain. Again they left him. 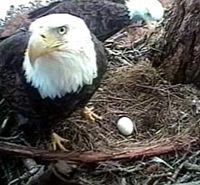 He was very thirsty. He heard someone laugh here below. He jumped up to him. The person said to him, “You have been taking care of the children. Drink this,” and gave him a piece of ice about so large (forefinger). “This will not be enough to satisfy me,” he thought. He drank it and was satisfied. He lay down beside the little eagles.

The father of the eagles came home. “DagônadeL, you are staying with my children. I thank you,” he said. Then he opened the house and they went in. (His house was behind the solid rock.) He gave him some food in a very small clay dish. “That is not enough for me,” he thought. The man took off his coat and hung it on the wall. Then he was like any other man. He gave his coat to the man. “Run around with my children for me,” he said. He flew across to a stone standing on the other side and back again. He flew way off and came back. He was strong.

The man who lived there called and from the center of the sky a large number of them came down. Some of them wished to carry him on their interwoven wings while some of them wished him to fly and others did not want him to. They put wings on him that were stretched out long and started out with him, up into the sky. The eagles flew under him carrying him up. When he was near the sky hole he began to fall he was so tired. The others got under him carrying him up. Then Panther let down his tail through the sky hole. The man seized it and he was pulled up. Panther had his home there.

They had enemies there with whom they fought. The hornets were their enemies. Some of them were black, some of them were yellow. The yellow ones had yellow houses; the black ones had black houses. Panther had much buckskin from which he made him shirts of many thicknesses. There were holes just for the eyes. The man went with the eagles to find the enemy. They camped close by them. He was carrying a quirt in his hand. Early the next morning when they went after wood they met the enemy and began to fight with them. The hornets were killing them. The man put on the shirt Panther had made for him and began whipping around with the quirt. He strung the bodies of those he had killed on a stick. He had two sticks of them. The eagles came back to their home. One of them said, “DagônadeL was killed first of all.” Panther said, “My grandchild is very brave. Watch for the men he has killed.” When he came back there from fighting the enemy, they commenced dancing around in a circle. Meadowlark danced around sunwise. “You had better go down, you say bad words against the people,” they told him.

About the Author: Pliny Earle Goddard (1869-1928) was an ethnologist and linguist of American Indian languages. After college graduation, he worked in a religious organization helping with a number of impoverished schools and eventually took a position as a missionary with the Women’s Indian Aid Association. Deciding to make ethnology his life’s work, he continued his studies, gaining a Ph.D. in linguistics. During his lifetime, he published a number of books and journals including several volumes entitled The Anthropological Papers of the American Museum of Natural History. This tale comes from his Jicarilla Apache texts, from Volume VIII of that series, published in 1911.