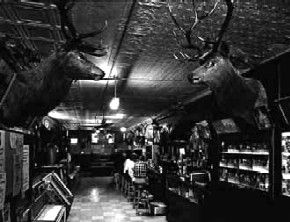 The New Atlas Bar in Columbus, Montana, has been servin’ up a brewsky or two for over one hundred years. Built in 1906, this old saloon doesn’t advertise itself as historic or museum-like; in fact, it doesn’t advertise at all. It just “hangs out” like it always has, much like the 60 plus animal mounts adorning the walls of this old tavern.

Catering mostly to the locals around Columbus, you’ll usually find just two or three people at the long bar, including Mel Gibson, on at least one occasion, who owns a nearby ranch.

When you first enter this old place, there’s a small room that was reserved for women in the old days, as they weren’t allowed in the main bar.

Two mammoth bars stand beneath the pressed tin ceiling, one of which was transported from a defunct saloon in Butte, Montana.  Amongst the other original furnishings, you will also see a smattering of small stuffed creatures hanging or displayed in the old tavern, including a two-headed calf in a glass case.

Don’t go getting’ fancy when entering this old saloon, as the dress code pretty much calls for Levi’s and cowboy boots.

And, don’t get any ideas about playing outlaw at this old place, or the “Montana Vigilantes” will be on your tail in no time, just like they were on August 1, 2004. Reportedly, two South Dakota would-be outlaws decided to try their hand at robbing this old saloon. Entering the old bar around 2:00 a.m. on August 1st, carrying a handgun and a rifle, they soon tied up the bartender and the three late night patrons, escaping through the back door with an undisclosed amount of cash. 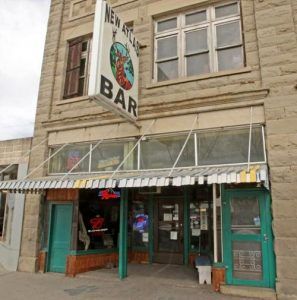 In no time at all, the captives unloosened themselves from the bandits’ poor bondage attempts and chased the robbers through the door, taking pot shots at the rear end of their red Buick. Soon, the Montana Highway Patrol took chase, apprehending the two. Now facing charges of aggravated kidnapping and felony robbery, the pair are potentially looking at the rest of their lives behind bars.

At the New Atlas Saloon, as well as the rest of Montana, “would be” bandits should be advised to leave their six-shooters and their outlaw aspirations behind.

Columbus, Montana is about 45 miles west of Billings on I-90.