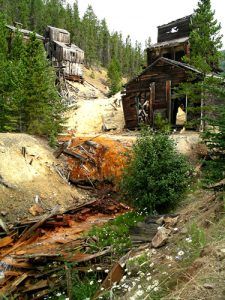 An abandoned mine site on Galena Creek in the Barker Mining District.

Situated on Galena Creek in the Little Belt Mountains of Judith Basin County, silver was first found by two different men in the fall of 1879. Near their finds, separate mining camps grew up including Barker, named for E.A. “Buck” Barker and his Barker Mine near Galena Creek; and Hughesville, situated just two miles down the mountainside from Barker and named for Patrick Hughes who filed the Grey Eagle claim.

Word spread quickly and within a year, several other mines had been opened including the Homestake, Hancock, Belfont, Harrison, May, Edna and dozens of others, which had some 100 miners working in the district.  Continuing to boom, other camps developed along Galena Creek, including Gold Run, Central City, Leadville, and Galena City, which initially produced high quantities of lead and silver ore that was first hauled to Fort Benton, before being shipped by steamboat down the Missouri River for smelting.

When the Clendenin Mining and Smelting Company was formed in 1881 and developed a smelter near Barker, profits for the mines went up as the plant processed some four tons of ore per day. Though the smelter operated only for about 18 months, it processed some $375,000 worth of bullion.

Another small smelter was built in the early 1880s but it operated only briefly and by 1883 the activity in the district had declined considerably as the surface ore had all but been depleted. The area camps were revived; however, in 1890 when the May and Edna, Liberty, and Wallace mines all reported rich strikes.

These finds were further enhanced when the Montana Central Railroad completed a branch line to Barker the following year and the ore could be shipped more easily to smelters at Great Falls, Helena, and Neihart. This revival was also a short one as the silver mines suffered during the Silver Panic of 1893 and all but the most productive operations were closed. Over the next decade, mining was only sporadic, primarily in recovering lead and billion from the slag dumps and tailings, and in 1903, the railroad spur made its last run.

Activity continued in the 20th century when a man named T.C. Power of Helena acquired several claims which he operated under the name of the Block P Mine. He soon built a mill in Barker in 1910 and up until the 1920s, the mine operated profitably. In 1927, Power sold the operation to the St. Joseph Lead Company that expanded operations until it became the largest lead producer in the state two years later.

However, once the Great Depression hit, the mine closed down and sat idle. It reopened briefly in the early 1940s but was closed again in 1943. Afterward, the mine changed hands and the equipment and railroad tracks were sold for salvage.

Though the two camps supported as many as 500 people during its peak periods, there is little left to testify to their more prosperous times. However, throughout the area, which still maintains a few residents and vacation homes, mining remnants can still be spied including several standing cabins and the remains of the Clendenin Smelter. The St. Joseph Company’s mining buildings are located on private property. An old cemetery can be seen at Hughesville.

The mining camps are located about 12 miles east of Monarch, Montana in the Little Belt Mountains. From Monarch, head south on US-89 toward Hughesville Road, turn left (east) for about 12 miles.