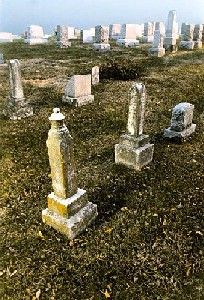 There are two legends that pertain to Bone Hill in Levasy, Missouri. One tells us the story behind the name “Bone Hill,” which originated in Indian lore long before the town was ever established. Many years ago, the Indians would stampede the buffalo and slaughter them on this hill, leaving the bones to bleach in the sun. The first settlers to arrive in the area found arrowheads, flint scraping tools, and bleached buffalo bones in large quantities.

The second legend revolves around a buried treasure and an unearthly light that appears upon the hill. Before the Civil War a farming family came to the area, along with their slaves, and settled on the hill. Soon, they had their slaves build a stone fence that completely surrounded their acreage. When border warfare was at its bitterest in 1862, the farmer sold his acreage for gold and supposedly buried it somewhere along the stone wall.

The family then moved away promising their neighbors that they were going to return in seven years. They were never seen in the vicinity again, but in the seventh year, in 1869, a mysterious light was said to be seen hovering above Bone Hill near the stone wall.

According to the legend, the light continues to appear every seven years. Some say it is the ghost of the farmer coming to claim his buried fortune.

Now, let’s say that I am old enough to maybe have been involved, as a youngster, in a few ghost chasings. I’m not saying that I believe in the legend — we just thought that one of the farmers was having a little fun.  I saw the light appear, then disappear and then show up in another area. We wanted to find out who was behind all of this but never caught up with them. Edwin F. Borgman of Levasy was born on that farm and in 1939 he stated, “The light appears for a fact, I’ve seen it. It puffs up like a glow and goes away. But there is nothing whatever to the buried treasure story. I’ve never been able to find how that thing started.” He also contended that if there had been gold buried there, he would have known about it. Borgman’s father bought the farm in 1878. 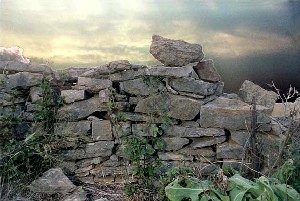 Stone wall built by slave labor near Levasy, Missouri. It is here that the treasure is said to be buried and the mysterious light hovers above.

There is nothing we can find as to who owned the land in 1862 when the treasure was supposedly buried. Nor can we find who owned the property during the next 16 years before H.H. Borgman purchased the land.  Geologically, Bone Hill consists of slate and limestone and is just west of some earlier soft coal mine areas. It is theorized that the mysterious light might be the result of gases oozing from seams in the “slate ribbed hillside”.

The light, if it is still doing its “seven-year glimmer” would have last appeared in 2002 with the next appearance scheduled for 2009.  I have been there, with a camera, waiting until dark to take pictures but I didn’t see anything. Friends I’ve talked to haven’t recently seen anything either, so maybe the ghost found its gold and has moved on. Believe it or not!

The remains of the stone wall, built by slave labor, can still be seen one and one-half miles south of Levasy on the west side of H Highway. Levasy, Missouri is approximately 25 miles east of Kansas City, Missouri on U.S. Highway 24.