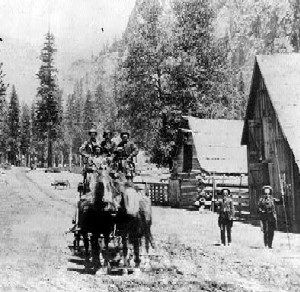 I grew up at the Genesee Buffalo Ranch just west of Denver, Colorado. My Father is still the ranch’s caretaker and lives in the two-story house built by the Patrick family in the 1860s. Headed west from Missouri, the Patricks and their five boys built the house and operated a stage stop on Genesee Mountain.

When we moved into the house, the former caretaker lived in a house trailer in the back yard. His wife would not set foot in the main house because she saw strange things and said the house was haunted.

When I was about 12, I remember a night when my mother was upstairs, screaming hysterically, as our dog barked loudly at the wall. My Dad and I ran upstairs to see what the commotion was all about. When we arrived, she related that she had seen a floating, glowing green ball go down the hall and disappear through the wall. I slept with the covers over my head for the next several weeks!

The next haunting came about six months later, a night that still feels as if it happened yesterday. As I was sleeping, my father woke me up and asked me if I could hear music in the house. Barely, I could make out the faint sounds of a fiddle or violin.

A few years later, we received a book from a local historian describing the complete history of the house and the Patrick family, information that was unknown to us until we read the book. The first murder in Jefferson county happened in our front yard in the 1870s, when one of the Patrick brothers shot and killed another brother in a dispute over a dog! The brother he killed was known to be very lazy, and the only thing he liked to do was sit around and play his fiddle!

When I read this and remembered the fiddle music during those nights, a cold electric sweat ran through my body. We also found out that the boys’ father is buried somewhere in the yard, but there is no marker.

The house has been peaceful now for several years, and hopefully, the Patricks are now at peace.

I still get a chill when I hear fiddle music!

About the Author: Jason Homola loves the Old West and spending time relic hunting and bottle digging. He also likes early military and outlaw history and most recently, has become involved in western reenactments.