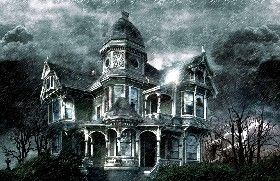 My husband and I recently purchased an old historic home and to our surprise, the backyard had the sweetest little play/dollhouse. The house is gorgeous and has proven to be our dream home come true but, the little house in the back is a totally different story. One night whilst moving empty boxes, I thought I heard a faint scream and quickly ran inside to tell my husband. He said it was probably a cat, so I didn’t give it much thought.

Several days later while doing a bit of gardening I heard a faint moan and the very same scream I had heard several nights earlier. This time, I knew it wasn’t a cat but didn’t know what it could have been. Having heard this for the second time, I became truly afraid.  Again, when I told my husband of the experience, he still insisted it was probably alley cats engaged in fighting.

The next day I was visiting with neighbors over coffee and relayed the story of the screams and moans that I had heard. They looked at each other then looked back at me. One of them asked me if the Real Estate agent failed to mention the death of several children at the house in the early 1900s!

I responded that this was the first I had heard of the legend. As the story goes, the couple built the home in the early 1900s, and while they were at it, built the sweet little playhouse for their three children.

Sometime later, marital bliss came to an abrupt end when the man of the house came home after being laid off at his job at the shipyard.  Stunned, he walked in to find his wife with a handsome bachelor that lived just down the road.

In a fit of rage, he ran from the scene and stabbed his three children, then returned and killed her with the knife. Though he also tried to kill her lover, the handsome man survived.

Afterward, the enraged husband was brought to trial and found guilty of his crimes. He was sentenced to die and was soon executed.

Legend has it that the screams and moans are those of the children who were killed by their angry, jealous father while outside for a day of play.

About the Author: Misty Rose Lee is a southern girl who has always wanted a historic home. Now that she has her gorgeous dream house, she admits that she could do without the playhouse. However, she also recognizes that it has been a part of the estate for so long that the “dollhouse” should be left alone. In Misty’s spare time, she loves to garden and breed show dogs and cats.