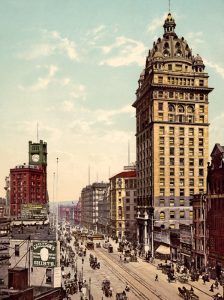 This is a story told by the late Benson Foley of San Francisco:

In the summer of 1881, I met a man named James H. Conway, a resident of Franklin, Tennessee. He was visiting San Francisco for his health, deluded man, and brought me a note of introduction from Mr. Lawrence Barting. I had known Barting as a captain in the Federal army during the Civil War. At its close, he had settled in Franklin, and in time became, I had reason to think, somewhat prominent as a lawyer. Barting had always seemed to be an honorable and truthful man, and the warm friendship which he expressed in his note for Mr. Conway was to be sufficient evidence that the latter was in every way worthy of my confidence and esteem.

At dinner one day, Conway told me that it had been solemnly agreed between him and Barting that the one who died first should, if possible, communicate with the other from beyond the grave, in some unmistakable way–just how, they had left (wisely, it seemed to me) to be decided by the deceased, according to the opportunities that his altered circumstances might present.

A few weeks after the conversation in which Mr. Conway spoke of this agreement, I met him one day, strolling down Montgomery street, apparently, from his abstracted air, in deep thought. He greeted me coldly with merely a movement of the head and passed on, leaving me standing on the walk, with half-proffered hand, surprised and naturally somewhat piqued. The next day I met him again in the office of the Palace Hotel. Seeing him about to repeat the disagreeable performance of the day before, I intercepted him in a doorway with a friendly salutation. I bluntly requested an explanation of his altered manner. He hesitated a moment; then, looking me frankly in the eyes, said:

“‘I do not think, Mr. Foley, that I have any longer a claim to your friendship, since Mr. Barting appears to have withdrawn his own from me — for what reason, I protest, I do not know. If he has not already informed you, he probably will do so.”

“‘Heard from him!” he repeated, with apparent surprise. “Why, he is here. I met him yesterday ten minutes before meeting you. I gave you exactly the same greeting that he gave me. I met him again not a quarter of an hour ago, and his manner was precisely the same: he merely bowed and passed on. I shall not soon forget your civility to me. Good morning, or–as it may please you–farewell.”

All this seemed to me singularly considerate and delicate behavior on the part of Mr. Conway.

As dramatic situations and literary effects are foreign to my purpose; I will explain at once that Mr. Barting was dead. He had died in Nashville four days before this conversation. Calling on Mr. Conway, I apprised him of our friend’s death, showing him the letters announcing it. He was visibly affected in a way that forbade me to entertain a doubt of his sincerity.

“‘It seems incredible,” he said, after a period of reflection. “I suppose I must have mistaken another man for Barting, and that man’s cold greeting was merely a stranger’s civil acknowledgment of my own. I remember, indeed, that he lacked Barting’s mustache.”

“‘Doubtless it was another man,” I assented, and the subject was never afterward mentioned between us. But I had in my pocket a photograph of Barting, which had been enclosed in the letter from his widow. It had been taken a week before his death and was without a mustache.

Excerpted from the book Present at a Hanging and Other Ghost Stories, by Ambrose Bierce, 1913. Ambrose Bierce was the author of several supernatural stories and tales of the Civil War, which he drew from his own experience as a Union cartographer and officer. Bierce worked as a journalist and editor for the San Francisco News-Letter and California Advertiser. In 1913, at 71, Bierce disappeared into revolution-torn Mexico to fight alongside the bandit Pancho Villa. Although a popular theory is that Bierce argued with Villa over military strategy and was subsequently shot, he probably perished in the battle of Ojinaga on January 11, 1914.