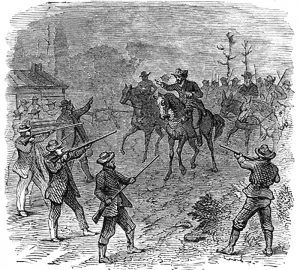 Fort Wakarusa, Kansas, was established in about 1856 in Douglas County.

During the territorial days of Kansas, opposing parties often gathered at places referred to as “forts.” Fort Wakarusa was a Free-State fortification at the crossing of the Wakarusa River, near the old town of Sebastian, about five miles southeast of Lawrence. Though a description of the fort is not available, it was most likely similar to that of other “forts” of the day —  log cabin surrounded by a line of earthworks or perhaps a line of palisades. One source said rifle pits were dug outside the fort.

Historian William E. Connelley drew a map in the 1920s that located the fort on the north side of the Wakarusa River, at Blue Jacket’s Crossing. However, because the river has changed course various times, the site of Fort Wakarusa may be on the south side of the river today. The fort was about midway between Lawrence, Kansas, and Eudora, Kansas.