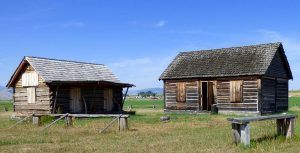 The southernmost post of the Hudson’s Bay Company, Fort Connah, Montana, was established in the summer of 1846 by Neil McArthur as the Flathead Indian post. It was named after the Scottish River, Connen. Located in the Mission Valley, the trading post, which consisted of three buildings, was built by Angus McDonald and his assistant George Simpson Jr. in 1847.

Angus McDonald’s Nez Perce wife Catherine joined him that fall with her newborn daughter Christina. They remained at the fort until he was promoted and transferred to Fort Colvile, Washington, in 1852.

The fort was then taken over by his son, Duncan McDonald. By 1871, the fur trade era had ended, and the trading post closed the following year.

Today, there is one remaining original building from the original trading post that continues to stand. It is believed to be the oldest standing building in Montana and is listed on the National Register of Historic Places.

The Fort Connah Historic Site also includes two historic log cabins that were moved to the site, which replicate the buildings that once made up the original trading post. It is located between St. Ignatius and Charlo, Montana, on US Highway 93.