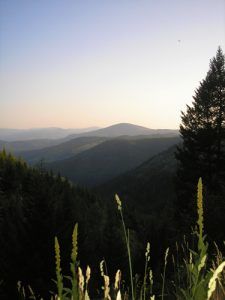 Located in the northeastern corner of the Garnet Range at the headwaters of McGinnis Creek, Coloma and several other mining camps, including Reynolds City, Springtown, and Yreka got their starts in 1865 when prospectors found gold in Bear Gulch and Elk Creek. This started one of the last large Montana gold rushes and within weeks, 6,000 people moved into the Garnet Mountain mining districts. The settlement of Coloma, on the north side of the divide, was the largest next to Garnet, which would be developed later. Eventually, the Coloma area would support two mills that crushed the ore that was hauled out to Helena, Butte, or Anaconda to be treated.

After lode deposits at Coloma were discovered in 1897, the area would really begin to boom and was most active at the turn of the century.

The largest of the Coloma lodes was the Mammoth Mine, which was developed beginning in 1896 and would yield about $200,000 of gold in the next two decades. Other mines, including the Comet, Dixie, Clemantha, Cato, and several others were also operating in the early 20th century; however, most were not profitable as much of the gold was lost in the tailings.

Though mining efforts continued as late as the 1950s, Coloma had all but died by 1918. Other mining camps in the area, including Reynolds city, Springtown, and Yreka had very short lives, lasting only a couple of years. All in all, the district produced only about $250,000 in gold, silver, lead, and zinc. Today, there is little left but a few cabins and mining remains.

Coloma can be reached from Montana Highway 200 by traveling southeast on Garnet Range Road about seven miles. Garnet Range Road continues on a circuitous route for about 13 miles through the old mining campsites of Reynolds city, Springtown, and Beartown before making its way to Garnet.