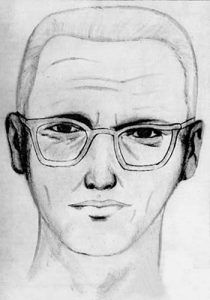 Artist’s rendition of the Zodiac Killer in 1969

In the late 1960s, the Zodiac Killer killed five people and severely injured two others in Northern California and taunted newspapers with coded messages.

The still-unidentified killer attacked seven victims in Benicia, Vallejo, Lake Berryessa, and San Francisco, California between December 1968 and October 1969. Four men and three women between the ages of 16 and 29 were targeted. However, in the killer’s letters to the Bay Area press, he would claim to have killed 37 people.

On December 20, 1968, he committed the first two murders, shooting and killing David Arthur Faraday, 17, and Betty Lou Jensen, 16, just inside the Benecia border. In his second attack on July 4, 1969, in Vallejo, he attempted to kill two people, Michael Renault Mageau, 19, and Darlene Elizabeth Ferrin, 22, but, Mageau survived despite gunshots to the head and neck. Just forty minutes after the shooting, the police received an anonymous phone call from a man claiming to be their killer and admitting to the murders of the previous two victims.

On August 1, 1969, the self-proclaimed “Zodiac Killer” sent local newspapers a three-part coded message explaining his motive for the killings. Six days later, he sent a separate letter to the editor, suggesting that his identity was buried within one of these ciphered messages.

Of the four cryptograms sent, only one has been definitively solved. It reads: 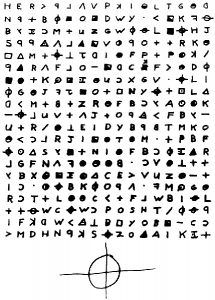 The last 18 letters have not been decrypted.

After sending the letters, the killing continued. On September 27, 1969, Bryan Calvin Hartnell, 20, and Cecelia Ann Shepard, 22, were stabbed at Lake Berryessa in Napa County. Hartnell survived eight stab wounds to the back, but Shepard died as a result of her injuries on September 29, 1969. In the Presidio Heights neighborhood of San Francisco, he shot and killed 29-year-old Paul Stine.

Four other murder victims are suspected to be victims of Zodiac, though these have not been confirmed. The killer himself claimed to have killed 37 people.

The murders did not fall under federal jurisdiction, so the FBI never opened an investigation. However, local law enforcement agencies called on the FBI’s expertise in handwriting analysis, cryptanalysis, and fingerprints to aid their investigations.

In the Zodiac Killer case, correspondence between law enforcement agencies in Northern California and forensic experts at the FBI’s Laboratory shows that the FBI made efforts to analyze handwriting samples and lift latent fingerprints from the letters and envelopes sent by the purported killer. FBI cryptanalysts, or code-breakers, were also enlisted to unravel a complex cipher that used more than 50 shapes and symbols to represent the 26 letters of the alphabet. Ultimately the code was made public and broken by two university professors.

Numerous suspects have been named by law enforcement and amateur investigators, but no conclusive evidence has surfaced. In April 2004, the San Francisco Police Department marked the case “inactive”, yet re-opened the case at some point prior to March 2007. The case also remains open in the city of Vallejo, as well as in Napa County and Solano County. The California Department of Justice has maintained an open case file on the Zodiac murders since 1969.

The unsolved nature of the murders and the Zodiac Killer’s elaborate methods of communicating with the public and his pursuers still captures the imaginations of screenwriters, authors, true-crime buffs, forensic scientists, and, of course, law enforcement.