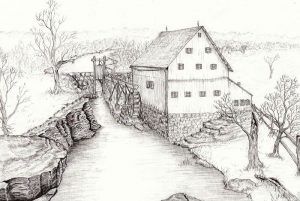 Boone’s Fort was the site of a grist mill that was fortified during the American Revolution. It was located near Milton, Pennsylvania, near the mouth of the Muddy Run River.

The mill was operated by Captain Hawkins Boone, who was said to have been a cousin to the more famous Daniel Boone. In 1777, during the American Revolution, three locals, including Captains Hawkins Boone, John Brady, and Samuel Daugherty, were mustered out of the 12th regiment of the Pennsylvania Line and sent, at the urgent request of the people of the west branch of the Susquehanna River Valley, to lead their defense. Captain Boone then stockaded his mill with the assistance of the two other captains, several neighbors, and other troops who were defending the area.

This area was extremely volatile during the Revolutionary War because it was at the frontier’s farthest edge, where there were frequent attacks on the colonists by the British army, American loyalists, and Native American tribes aligned with the British. Beyond this point, there was no colonial government and no protection. However, there were several other small forts in this area, most notably, Fort Freeland. In late June 1779, after repeated attacks by the British, several colonial families moved from their homes to live behind Fort Freeland’s walls. Although there were rumblings of a pending attack, the colonists were completely unprepared when more than 300 British soldiers and supporters stormed Fort Freeland early on the morning of July 28, 1779. With all the able-bodied men already off to war, only 21 boys and old men were to defend the fort. Seeing the hopelessness of their situation, the colonists soon negotiated a surrender. 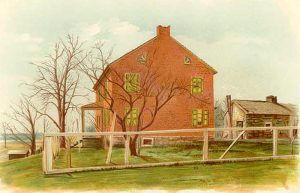 News of the attack reached Captains Hawkins Boone, John Brady, and Samuel Daughterty, who led the defense at nearby Fort Boone. A relief party rushed in to defend Fort Freeland, not knowing that it had already surrendered. The battle that followed was one of the American Revolution’s bloodiest and pivotal because the fall of Fort Freeland left the colonial American frontier defenseless. All three captains were killed. Later, another mill called the Kemmerer Mill was built at the same site as Boone’s Mill. It was located about midway between Milton and Watsontown.

Captain Hawkins Boone’s death on July 29, 1779, was a serious loss to the community, who looked up to him for his good results from his ability and experience. After the Battle of Fort Freeland, the Indians continued to terrorize the area, and most of the remaining settlers left and didn’t return until the end of the war.