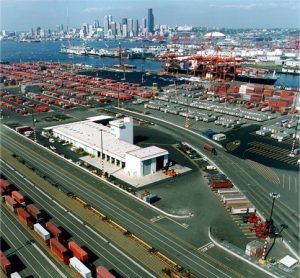 Harbor Island is the largest man-made island in the United States. Located at the mouth of Seattle’s Duwamish Waterway that empties into Elliott Bay, the island was built by the Puget Sound Bridge and Dredging company in 1909. The island was built from 24 million yards of earth from the dredge spoils of the Duwamish River, and the soil of Jackson Hill and Dearborn Street re-grades. At 350 acres, it was the largest artificial island in the world when it was built.

Filling in the vast tide flats south of downtown Seattle, the dredging also created the area now occupied by Union Station, King Street Station, Seattle’s sports stadiums, and much of the city’s industrial base.

Growing resentment of railroad and shipping monopolies led King County voters to create the Port of Seattle in 1911, of which Harbor Island became a part.

Harbor Island lost its title as the world’s largest man-made island in 1938 when Treasure Island in the San Francisco Bay was completed. However, in 1967, Harbor Island was increased by adding fill to 395 acres and regained its title. Though it continues to be the largest artificial island in the United States, the Rokko Island in Japan is now more than three times larger.

After World War II, the Port of Seattle diversified its activities with the expansion of Fishermen’s Terminal, the construction of Shilshole Bay Marina, ambitious developments on Harbor Island, and the creation of Seattle-Tacoma International Airport.

Over the years, the island has been used for commercial and industrial activities, including shipbuilding and repair, lead smelting, petroleum storage, metal fabrication, and containerized cargo shipping.

Fringed by wharves and cranes, the island houses numerous warehouses, laboratories, other industrial buildings, and railroad years. It is the Port of Seattle’s major point of entry for cargo transferred from oceangoing vessels to trucks and railcars.

There are no residences on Harbor Island, but approximately 10,000 people live within one mile of the site.

Both the West Seattle Bridge and the Spokane Street Bridge pass over the island.