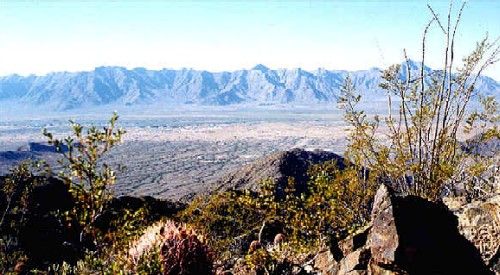 The arid Sierra Estrella Mountain Range south of Phoenix, Arizona can be a dangerous trek for even the most experienced hiker, as the jagged peaks provide no water along its few rarely used trails. However, what these mountains do offer, is a rich history and the promise of buried treasure.

According to legend, in 1847 a Spaniard named Don Joaquin led a mining expedition in these mountains, in the hopes of finding gold. When his dream was realized, he, like so many of his counterparts, enslaved the Indians to work the mine and bring out the precious metal. The mine, located on what was called the Zig Zag Trail, remains shrouded in mystery.

One day, as Joaquin oversaw the mining operations, an Indian scout informed him that the American Army was headed in his direction. Without adequate reinforcements, Joaquin made the decision to temporarily cease the mining operations and return to Mexico. Loading 3,000 pounds of gold on to the backs of 15 mules, he and some of his men headed up Zig Zag trail towards Butterfly Peak. Continuing on towards Montezuma’s Head, the group turned into a short box canyon about halfway down the trail.

Spying a cave, Don Joaquin had his men bury the gold in the back of the cavern, then killed the Indian scout, placing his body over the hidden treasure.

The remainder of his men had been instructed to wait at a nearby butte and after having hidden the cache, Joaquin rejoined his fellow miners. However, greed can make even the most loyal of men resort to mutiny and that very night, Don Joaquin was murdered and his treasure map. Still at risk from the approaching American Army, the men headed back to Mexico the next morning, along with the guide to the buried treasure.

Nothing more was heard about the Spaniards for the next 35 years until one day an old man arrived in Phoenix with the original treasure map in his hands. Searching the peaks for the long lost gold, he was soon scared away by hostile Indians and the man returned to Mexico without the gold.

No one knows what happened to the man or the original map, but supposedly the buried treasure remains to this day hidden somewhere in the Sierra Estrella Mountains.