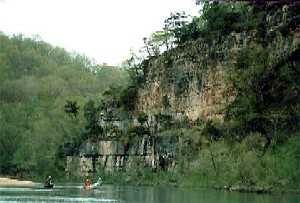 A few miles northwest of Jacks Fork, Missouri, near the Current River, is said to be the remains of a hidden mine that is rich in copper ore. In the mid-nineteenth century, a man by the name of Joseph Slater regularly appeared in New Orleans with huge raft-loads of high-grade copper ore. During these regular visits, he sold more than $50,000 worth of the rich mineral over a three or four-year period.

Wanting to keep the location of his mine secret, Slater filed a mining claim on a tract of land that was actually about two miles from the shaft.

Living in a cabin near the Current River with his daughter, Slater continued to mine until he learned through a government survey that the mining claim he had filed was on another man’s property.

Though he would have liked to have bought the land, he knew that an offer might reveal the location of the mine. Instead, he and his daughter sealed up the mine, careful to hide any signs of digging, and made plans to go “Back East.” His plan was to stay away for two or three years and then approach the owner about buying the land, under the pretense of farming the acreage. 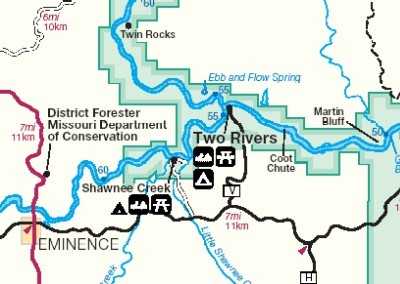 Where the Current and Jacks Fork Rivers meet

However, Slater never made it further east than St. Louis, where he could keep up on the progress of Missouri mineral exploration and development. But before he was able to return to the Jacks Fork area, he died and his daughter eventually married, moving west without ever returning to Missouri. Though the folks in Shannon County never saw the miner nor his daughter again, the legend of the lost copper mine continued to be told.

On June 4, 1926, the Kansas City Star ran a story about the Slater diggings, stating in part, “There were those who believe that at some time the lost mine will be found and that it will reveal a deposit of copper and perhaps other metals that may revolutionize the Ozark region of Missouri.”

The mine is said to be in the vicinity of the junction of the Jacks Fork and Current Rivers, and though many have searched for the mine for more than a century, it has never been found. Shannon County is located in the Ozark Hills of southern Missouri.