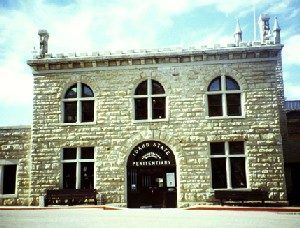 The Old Idaho Penitentiary State Historic Site, east of Boise, Idaho, was a functional prison from 1872 to 1973.

Idaho Territory was less than ten years old when the territorial prison was built east of Boise in 1870. The penitentiary grew from a single cell house into a complex of several distinctive buildings surrounded by a high sandstone wall. Built by convict labor, the prisoners quarried the stone from the nearby ridges to complete the construction.

Serious riots occurred in May 1952, August 1971, and in March 1973 over living conditions in the prison. The 416 resident inmates were moved to the new Idaho State Correctional Institution south of Boise and the Old Idaho Penitentiary was closed on December 3, 1973.

Over its century of operation, the penitentiary received more than 13,000 convicts, of whom 215 were women. Two famous inmates were Harry Orchard and Lyda Southard. Orchard assassinated former Governor Frank Steunenberg in 1905 and Southard was known as Idaho’s Lady Bluebeard for killing several of her husbands to collect upon their life insurance.

After the Penitentiary closed in 1973, the site was placed on the National Register of Historic Places. 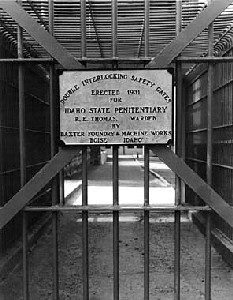 Today, the Old Idaho Penitentiary is operated by the Idaho State Historical Society as a fascinating Boise tourist attraction that offers one of the most informative prison tours in the West. The prison is open to visitors to walk through the courtyards, the cells, the gallows, and the “coolers” where prisoners were sentenced to solitary confinement. You will begin your visit with a video presentation recalling prison history, notorious inmates, and daily prison life. Once inside the Yard, imagine life in the foreboding sandstone cell houses, see the contrasting beauty of the historic rose gardens, and view the effects of the 1973 riot. Exhibits are located throughout the site.

The prison is open all year and admission is charged for the tour.