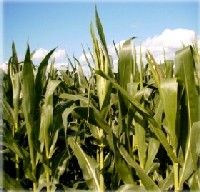 An Arikara woman was once gathering corn from the field to store away for winter use. She passed from stalk to stalk, tearing off the ears and dropping them into her folded robe. When all was gathered she started to go, when she heard a faint voice, like a child’s, weeping and calling:

The woman was astonished. “What child can that be?” she asked herself. “What babe can be lost in the cornfield?”

She set down her robe in which she had tied up her corn, and went back to search; but she found nothing.

As she started away she heard the voice again:

She searched for a long time. At last in one corner of the field, hidden under the leaves of the stalks, she found one little ear of corn. This it was that had been crying, and this is why all Indian women have since garnered their corn crop very carefully, so that the succulent food product should not even to the last small nubbin be neglected or wasted, and thus displease the Great Mystery.

About the author: Myths and Legends of the Sioux was written by Marie L. McLaughlin in 1913, and is now in the public domain. McLaughlin, who was of ¼ Sioux blood and was born and reared in the Indian community, acquiring a thorough knowledge of the Sioux people and language at an early age. While living on an Indian reservation for more than forty years, she learned the legends and folklore of the Sioux. These legends and myths were told in the lodges and at the campfires of the past, and then later by the firesides of the Dakota. McLaughlin kept careful notes of the many tales told to her by the Sioux elders until she published this book of legends in 1913.

Back to: Myths &  Legends of the Sioux