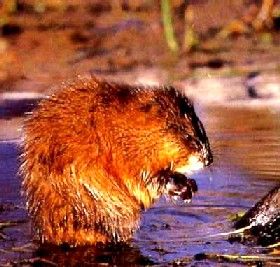 On the shore of a lake stood an artichoke with its green leaves waving in the sun. Very proud of itself it was, and well satisfied with the world. In the lake below lived a muskrat in his tepee, and in the evening as the sun set he would come out upon the shore and wander over the bank. One evening he came near the place where the artichoke stood.

“Ho, friend,” he said, “you seem rather proud of yourself. Who are you?” “I am the artichoke,” answered the other, “and I have many handsome cousins. But who are you?”

“I am the muskrat, and I, too, belong to a large family. I live in the water. I don’t stand all day in one place like a stone.”

“If I stand in one place all day,” retorted the artichoke, “at least I don’t swim around in stagnant water, and build my lodge in the mud.”

“You are jealous of my fine fur,” sneered the muskrat. “I may build my lodge in the mud, but I always have a clean coat. But you are half buried in the ground, and when men dig you up, you are never clean.”

“And your fine coat always smells of musk,” jeered the artichoke.

“That is true,” said the muskrat. “But men think well of me, nevertheless. They trap me for the fine sinew in my tail; and handsome young women bite off my tail with their white teeth and make it into thread.”

“That’s nothing,” laughed the artichoke. “Handsome young warriors, painted and splendid with feathers, dig me up, brush me off with their shapely hands and eat me without even taking the trouble to wash me off.”

About the author: Myths and Legends of the Sioux was written by Marie L. McLaughlin in 1913, and is now in the public domain. McLaughlin, who was of ¼ Sioux blood and was born and reared in the Indian community, acquiring a thorough knowledge of the Sioux people and language at an early age. While living on an Indian reservation for more than forty years, she learned the legends and folklore of the Sioux. These legends and myths were told in the lodges and at the campfires of the past, and then later by the firesides of the Dakota. McLaughlin kept careful notes of the many tales told to her by the Sioux elders until she published this book of legends in 1913.

Back to: Myths &  Legends of the Sioux