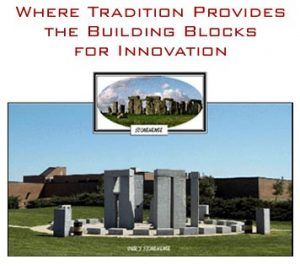 Not only can you get your kicks on Route 66 while touring Rolla, Missouri but you can also experience a bit of Druid Europe at the University of Missouri campus. Here, a modified scale model of Stonehenge was carved by students more than twenty years ago.  The megalith was dedicated on June 20, 1984, on the summer solstice, by a Druid Priest.

Built to showcase the stone carving capabilities of the university’s high-pressure water jet lab, this Stonehenge is reportedly accurate to within 15 seconds, when used as a clock.

The half-sized replica, utilizing some 160 tons of granite, was carved in a month with the aid of the high technology equipment, a feat that in ancient times, would have taken decades.

In 1984 the University of Missouri-Rolla received one of the prestigious National Society of Professional Engineers Awards for the Stonehenge project.  These awards are typically given for such items as the space telescope.

Today this monument to both the past and the future sits on the northwest corner of the University campus at 14th Street and Bishop Avenue, inviting both students and visitors to drop by for a look at this amazing accomplishment.

Rolla – The Middle of Everywhere