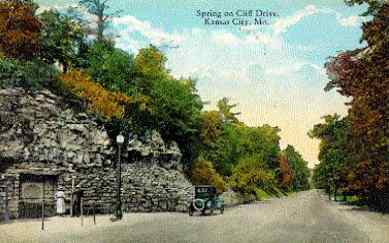 Cliff Drive, established in 1900, is the only Missouri scenic byway located in an urban area, passing right through Kansas City. The 4.5-mile historic drive is also one of the shortest scenic byways in America.

Situated within historic Kessler Park, established in 1895, the long, linear park stretches from roughly Paseo on the west to Chouteau traffic way on the east. The design and planning effort of the park and byway were an integral part of the evolution and development of Kansas City as a major metropolitan area.

Visitors have been streaming through the park for over a century, the first by horse and buggy. Natural wonders of the drive include limestone bluffs next to steep forested slopes descending to the industrial Missouri River bottoms. A small portion of high-quality forest lies between Cliff Drive and Chestnut Trafficway where large trees tower over ferns, wild ginger, Soloman’s seal, dogtooth violet, and many varieties of wildflowers. 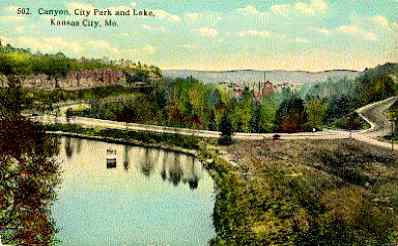 Near the east entrance to Cliff Drive (just west of the intersection of Van Brunt and Gladstone Boulevards), a well established but primitive trail runs along the steep slope which parallels Gladstone Boulevard. The trail travels through a forest of large maples and passes a half-dozen springs issuing from the hillside. 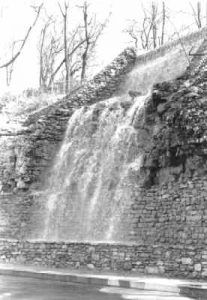 The famous Cliff Drive Spring originally served the pioneer Scaritt family, in their log cabin high on the hillside above. Long ago, these pioneers kept their milk and butter cool in the waters of the spring. In 1899, the city acquired the property from the Scarritt estate. The natural spring has been through many transformations during the years. Falling into disrepair, the fountain was restored in 1959, only to be closed in 1962 due to water contamination.

Covered by earth, the scallop-shelled fountain was discovered again in the late 1980s by a contracting company and was restored to its state today as a beautiful waterfall.

Biking and hiking are very popular along the drive and the more adventurous explorers can be found climbing along the steep bluffs of the park.

Cliff Drive is located just northeast of the convergence of Interstates 70, 35, and 29, south of the Missouri River. The byway runs from the intersection of The Paseo and Independence Avenue, through to Indian Mound on Gladstone Boulevard at Belmont Boulevard. An easy way to access Cliff Drive is from an entrance near the Kansas City museum at Benton and Gladstone Boulevards.