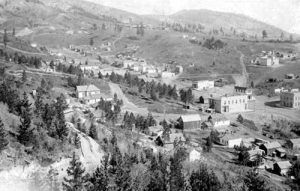 Placer and lode gold was first discovered in the North Moccasin Mountains of central Montana in the early 1880s.

Some large gold nuggets were taken out of Iron Gulch; however, lack of water caused the miners to leave without any significant development. When large lode deposits were found in the district in 1893, more attempts were made to get at the gold, but the ore was difficult to treat and little was done until improved cyanide processes were developed at the turn of the century.

With the new technology, capital was flowing and when Harry T. Kendall installed a cyanide mill in 1900, the area began to boom. In 1901, a townsite was platted and named Kendall. Within no time, the town sported two hotels, a bank, a newspaper, restaurants, retail businesses, a school, a brothel, and several saloons. Two stage-coach lines connected Kendall to Lewiston. A few years later, the town also included the Jones Opera House, two churches, and peaked at a population of about 1500.

The most prosperous mines were the Kendall, Santiago, Barnes-King and Horse Shoe Mines. By 1903, the district was leading the state in gold production.

Plans were made to build a railroad spur to the flourishing town, but it never happened. Instead, supplies and ores began to be moved by automobiles and trucks. The town continued to prosper until the largest mine, the Barnes-King, folded in 1920, at which time it began to decline.

Soon other mines also closed and the once-prosperous camp became a ghost town. Throughout the years, the area mines produced as much as $15 million in gold. Once the mines closed, sporadic placer mining continued to occur, but large quantities were never found. 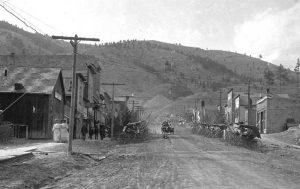 Though Kendall once boasted several substantial buildings, only three stone buildings remain today. Unfortunately, several of the buildings collapsed because of the many mine shafts below them.

Kendall is located north of Lewistown on Highway 87, along with the old mining camps of Gilt Edge and Maiden.