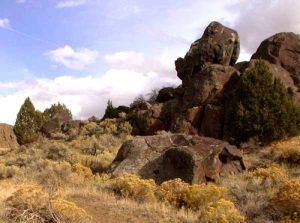 Located along the Snake River west of American Falls, Massacre Rocks State Park  features a famous configuration of boulders along the south bank of the Snake, known alternatively as Massacre Rocks, “Gate of Death,” or “Devil’s Gate.”

A famous spot along the Oregon Trail and California Trail during the mid 19th century, emigrants gave this name to the narrow passage of the trail through the rocks, from the fear of possible ambush by Native Americans. According to diaries of emigrants, settlers in five wagons clashed with Shoshone just east of the rocks on August 9th and 10th, 1862. Ten emigrants died in the fight, which involved four wagon trains. The skirmishes took place east of the park and not at Devil’s Gate as commonly believed, but the undeserved name stuck.

Settlers and the natives used the area for generations because the Snake River is accessible and relatively gentle in this part of its run. The violent episodes were the exception, not the rule.

All that’s left of an extinct volcano, the rocks were often used as a campsite for wagon trains along the trail. Many emigrants carved their names and dates on the rock face, now protected by a shelter. The actual passage through the rocks is now Interstate 86 along the south edge of the park.

Geologically the park was created during the repeated volcanic activity on the Snake River Plain. The rocks themselves were deposited in their present location at the end of the last ice age, approximately 14,500 years ago, during the catastrophic flood known as the Bonneville Flood, when much of Lake Bonneville surged down the Snake River. A notch in the cliff on the north bank of the Snake opposite the park was the site of an ancient waterfall of a side channel of the waters in the aftermath of the flood. 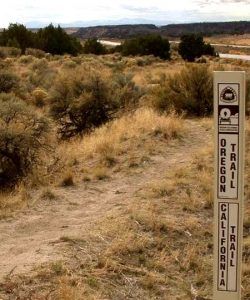 Ruts of the Emigrant Trail near Massacre Rocks

The 995-acre park also includes a visitor’s center describing the history and geology of the park. Massacre Rocks State Park offers access to the Snake River and a 50 unit campground with water and electrical hookups for RV’s, picnic areas, restrooms, and hot showers.  Along the foot trails, you can see the original Oregon Trail remnants on the south side of Interstate 86.