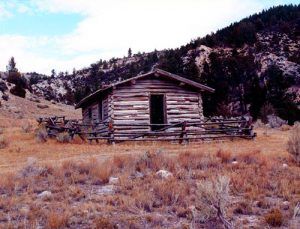 Located in the Birch Creek Mining District in the Pioneer Mountains of southwest Montana, rich ores were first found here as early as 1864, when a prospector named J.A. Kline filed the first claim, the O.K. Lode, which produced silver and copper. A few months later, O.D. Farlin discovered the Greenwich Lode, but it would not be worked for several years.

When O.D. Farlin and his brother, W.L., returned to the area more than a decade later and discovered new claims, including the Indian Queen and Greenstone Lodes in 1875, they began to work their original find, as well as their new claims, which all produced silver and copper. Soon, the small mining camp of Farlin was formed but would grow slowly, as the mines primarily produced copper and there was no nearby economical transportation that would make it profitable to mine on a large-scale.

When the Utah and Northern Railroad laid track to present-day Dillon in 1882, and later to Butte, the district began to fill up with more miners, as well as ranchers, but still, the area did not develop significantly.

The first school was built in 1896, but it would be after the turn of the century that the small mining camp really began to boom. In the meantime, the claims changed hands and in 1900, the Indian Creek Mine was under the control of the Birch Creek Copper Mining and Smelting Company, which built a smelter to work the Indian Queen Mine. By 1903, the mine and smelter employed about 20 men, which soon grew to about 60. 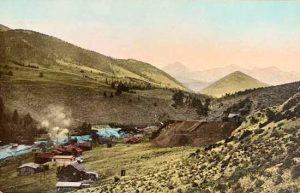 Though the Birch Creek Copper Mining and Smelting Company continued to operate the mine, they operated the smelter only about a year before it was taken over by the Western Mining Company, who began to expand it and provided services to other mines, including the Golden Treasure, Whale, Los Angeles, and Snowball Mines. Soon, the mining camp blossomed and boasted about 500 people, which boasted a general store, a butcher shop, and a post office.

By the spring of 1906, the Birch Creek Copper and Smelting Company was in trouble and its three owners skipped town with the monthly payroll (about $1400.00.) When one of the owners had the audacity to return to Farlin, he was promptly hanged by the miners.  A second owner, who wanted to return, paid for the privilege of returning and the third owner was never seen again.

Over the years, as the ore dramatically decline, the mines and smelter continued to operate only intermittently until 1923, processing almost 23 tons of ore, primarily copper.

Today, Farlin is just a sleepy little collection of buildings in the Beaverhead-Deerlodge National Forest. The school, butcher’s shop, a few cabins, and mining remains are all that’s left.

The old mining camp is located about 20 miles northwest of Dillon. Go north on I-15 to the Birch Creek Exit (#74), and about 7 miles west on Birch Creek Road.