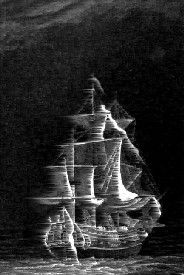 Death Ship of the Platte River in Wyoming

On the Platte River between Torrington and Alcova, Wyoming, a legend persists that a “Ship of Death” continues to sail upon the sometimes dangerous waters. The phantom ship rises out of a strange mist that quickly becomes a massive rolling ball of fog. As the ship grows closer, witnesses report that its sails and masts are covered with frost. The crew, also covered with frost, stands upon its deck and huddled around a corpse lying on a canvas sheet. The legend continues that the ship always foreshadows the death of someone who will die on the day it is spotted. As the crew steps back, the corpse’s identity is revealed as a person known by the witness.

The first alleged sighting was made in 1862 by a trapper named Leon Weber. When the crew stepped back, the corpse revealed the body of Weber’s fiancé, who died later that same day. Another sighting of the phantom ship was made by a cattleman, Gene Wilson, in 1887 when he saw his wife’s body laid out on the canvas. In 1903, another tale describes that he spied the ship when Victor Heibe was chopping down a tree on his riverfront property. Laid out on the deck was the body of a close friend.

Every case was reported in the late fall, and in all cases, the person seen upon the deck of the phantom ship died on the very same day.

One of the sightings allegedly occurred six miles southeast of the town of Guernsey, Wyoming. Another sighting was said to have occurred at Bessemer Bend on the Platte River.