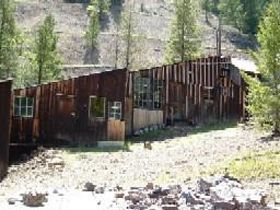 Never patented, the Charter Oak Mine and Mill operated on and off from 1916 to 1955.

It was first operated as a stamp mill by the Hopkins family until the stock market crash of 1929, at which time, it closed for several years. However, in 1942, it was reopened by the Hopkins & Sons Mining Company, who developed a 50-ton flotation mill that can still be seen today. During World War II, the lode mine mill hummed with activity operated by the Hopkins brothers and a leaseholder by the name of James Bonner. Bringing out tons of valuable lead and zinc, essential to fighting the war, the operation profited for a number of years.

However, by the early 1950s, it was declining due to market conditions and lack of investment capital. The land then changed hands several times but very little hard rock mining was done. In the 1980s, plans to upgrade the mill to process older tailings and waste rock were unsuccessful. It became U.S. Forest property in 1995 and today the old site contains a couple of standing buildings and mining-milling equipment. The mine has been stabilized and interpreted and is open for public visitation on select summer weekends.

The remains of the Charter Oak operation are located near the Little Blackfoot River south of the community of Elliston. To get there, travel west from Helena on US Highway 12 for 22 miles to the Little Blackfoot River turnoff (Forest Road #227). Turn south off the highway and drive 2.9 miles until the road forks. Follow the right fork for 1.3 miles. Turn left on Forest Road #227 B-1 and drive for 2 miles, passing through two open gates.