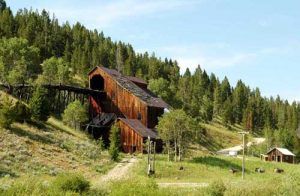 Situated off the Pintler Scenic Route in Montana, is the old mining camp of Cable and the Gold Coin Mill. The settlement began when three prospectors made camp here in 1867. When the miners awoke the next morning their horses were gone and as they searched for them, they found a large quartz pillar loaded with gold. The mine was named the Atlantic Cable Lode as a tribute to the laying of the Trans-Atlantic cable, and the camp that grew up around it simply took on the name, Cable. With the help of Helena financers, the mine was developed but after numerous disagreements between the three miners, operations were ceased a decade later and the property sold.

In 1906, the Gold Coin Mill was built, and the mine and mill would operate sporadically until 1940 when it closed and the town became a ghost. The mill and several area buildings are on private property and are closed to visitors due to vandalism. However, it can be seen from the highway. It is located along Montana Highway 1 between Drummond and Anaconda, north of Silver Lake.