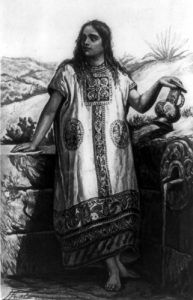 Centuries ago, when Toltec civilization had extended over Arizona, and perhaps over the whole West, the valleys were occupied by large towns — the towns whose ruins are now known as the City of Ovens, City of Stones, and the City of the Dead. The people worked at trades and arts that had been practiced by their ancestors before the pyramids were built in Egypt. Montezuma had come to the throne of Mexico, and the Aztec were a subject people; Europe had discovered America and forgotten it, and in America, the arrival of Europeans was recalled only in traditions.

But, like other nations, the Toltec became prey to self-confidence, luxury, wastefulness, and to deadening superstitions. Already the fierce tribes of the North were lurking on the confines of their country in faith of speedy conquest, and at times, it seemed as if the elements were against them.

The villagers were returning from the fields, one day when the entire region was smitten by an earthquake. Houses trembled, rumblings were heard, people fell in trying to reach the streets, and reservoirs burst, wasting their contents on the fevered soil. A sacrifice was offered.

Then came a second shock, and another mortal was offered to the gods. As the earth still heaved and the earthquake demon muttered underground, the king gave his daughter to the priests, that his people might be spared, though he wrung his hands and beat his brow as he saw her led away and knew that in an hour her blood would stream from the altar.

The girl walked firmly to the cave where the altar was erected — a cave in the Superstition Mountains. She knelt and closed her eyes as the officiating priest uttered a prayer, and, gripping his knife of jade stone, plunged it into her heart. She fell without a struggle. And now, the end.

Hardly had the innocent blood drained out and the fires been lighted to consume the body when a pall of cloud came sweeping across the heavens; a hot wind surged over the ground, laden with dust and smoke; the storm-struck earth writhed anew beneath pelting thunder-bolts; no tremor this time, but an upheaval that rent the rocks and flung the cities down. It was an hour of darkness and terror. Roars of thunder mingled with the more awful bellowing beneath; crash on crash told that houses and temples were falling in vast ruin; the mountainsides were loosened and the rush of avalanches added to the din; the air was thick, and through the clouds, the people groped their way toward the fields; rivers broke from their confines and laid waste farms and gardens! The gods had indeed abandoned them, and the spirit of the king’s daughter took its flight in company with thousands of souls on whose behalf she had suffered uselessly.

The king was crushed beneath his palace roof and the sacerdotal executioner perished in a fall of rock. The survivors fled in panic and the Ishmaelite tribes on their frontier entered their kingdom and pillaged it of all abandoned wealth. The cities never were rebuilt and were rediscovered but a few years ago, when the maiden’s skeleton was also found. Nor does any Indian cross Superstition Mountains without a sense of apprehension.

About the Author: Charles M. Skinner (1852-1907) authored the complete nine-volume set of Myths and Legends of Our Own Land in 1896. This tale is excerpted from these excellent works, but is not verbatim, as some editing has occurred.