The Archaic Period in America spans from the end of the last Ice Age about 10,000 years ago to the beginnings of agriculture 2,500 years ago.

Archaic cultures are defined by common characteristics rather than a particular time or location. The primary characteristics are changes in subsistence and lifestyle. Their Paleo-Indian predecessors were highly nomadic hunters and gatherers who relied on a few species of wild plants and game. The Archaic peoples lived in larger groups, were sedentary for part of the year, and had a varied diet that eventually included some cultivated foods.

After the ice age, the climate warmed dramatically, and as climatic conditions shifted, people adapted. Warmer climate encouraged the growth of new plants, and deciduous forests replaced the subarctic evergreen forests and wetlands of the Paleo period. As a result, the amount and variety of food increased. Plants became an essential part of the diet as the natives gathered nuts, berries, tubers, roots, and seeds. 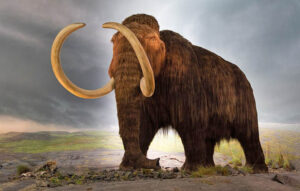 Animals also changed their way of life, and Ice-Age mammals such as the mastodon became extinct. Other animals moved to habitats with familiar plant foods, some ending up hundreds of miles away from their original locations. The Archaic people hunted antelope, deer, elk, moose, bison, bear, rabbit, and turkey with a new tool called an atlatl. This spear-thrower was weighted by stones and had the force and accuracy to bring down large game from safe distances.

Archaic peoples also created numerous other tools during this period. Sturdy stone axes allowed them to cut hollow trees to make canoes. People began to grind stones to shape weights, sinkers, and jewelry. Nets and bone hooks were made for fishing and collecting shellfish. There were many changes in how they made points for knives and spears.

Late in this period, people began developing trade routes, bringing new materials and ideas to the people. Some trade materials were manufactured into decorative items used to demonstrate the status of leaders. Their yearly return to the same camps may have encouraged them to bury their dead ceremonially. Decorative items were often buried with important individuals. 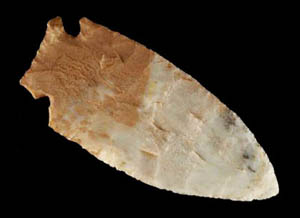 By the end of the Archaic Period, people began to use domesticated crops and to produce pottery. More stable food sources allowed residents to stay in base camps longer and travel in bigger groups. As a result, they left more artifacts behind for future archeologists to uncover. Archaic artifacts such as grinding stones, wooden posts from living structures, and fireplace stones helped archeologists understand camp life.

Over time, villages became larger and more widespread, indicating that agriculture was a successful strategy for producing food and ensuring the stability and success of communities. These successes laid the foundation for further population growth and the regional differentiation of cultural traditions that gave rise to the modern tribal divisions.

The Archaic Period is divided into three sub-periods, classified by its toolsets, settlement patterns, and lifeways. Each sub-period represents a similar but slightly different way of life.

At the end of the Ice Age, the climate changed significantly, impacting plant and animal habitats. The great glaciers that covered the northern part of North America gradually melted away. Large species, like the woolly mammoth, were becoming extinct. During this warmer time, new people came over from Siberia into North America through the Arctic Ocean.

Researchers generally believe that Early Archaic peoples lived in bands of related people numbered between 50 and 150. They probably defined their territories either by the presence of rivers or by distances from stone sources for tools. Smaller groups may have come together at a prearranged location to pass the winter together in a larger group, then returned to their territories for the rest of the year.

During this time, the population began to increase around 8500 BC and continued throughout the entire Archaic period. Stone tools became more common, diverse, and specialized. Some groundstone tools included celts, adzes, axes, and pestles. People still lived in small groups and moved seasonally, hunting and gathering during this time. Houses would have been easy to assemble and reassemble from camp to camp, commonly constructed of wooden frames covered with animal hides. They ate hickory nuts, acorns, berries, fruit, fish, deer, bear, rabbit, turkey, pigeon, and waterfowl.

During the Middle Archaic Period, the climate became dryer and warmer, though the effect varied across the nation. These changing conditions led many people to migrate elsewhere or live in smaller groups. Generally, their tool kits were very similar to that of the Early Archaic, including projectile points, knives, scrapers, grooved axes, atlatl weights, grinding stones, plummets, and net sinkers. Their diet was also similar, with people continuing to eat deer, elk, raccoon, birds, turtle, fish, hickory, and nuts. Middle Archaic people were less nomadic, living in villages for at least part of the year. In the summer, they traveled and slept in tents.  People established long-distance trade networks and began engaging in warfare for the first time. This may have resulted from competition for resources during this hot, dry era.

During this time, the climate stabilized and became closer to modern climate patterns. People began planting gardens with squash, sunflower, and other seed-bearing plants. Gardens tied people more firmly to specific places, required them to stay longer and return more often to a place to tend their gardens. As people became more sedentary, the population increased in size, and social complexity increased. However, Archaic peoples continued to rely upon hunting and gathering for most of their food. They invented new tools to get what they needed more efficiently and left more of a mark on the landscape.

Archaeologists document Late Archaic villages by hearths where people cooked meals every day, deep storage pits that kept food safe for the long winter months, and middens left behind when people threw their trash out. They also made further developments and refinements in the tools and containers they made during the Late Archaic period. These included large stone bowls that could be placed directly on a fire for cooking. They also made new stone objects like birdstones and bannerstones carved into various shapes. Birdstones are so named because they look like animal effigies, while bannerstones are usually symmetrical. Other stone items included weights for fishing nets, axes, pipes, beads, and pendants. Basketry and netting augmented the collection and storage. 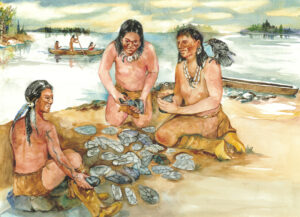 Burial practices became more complex and varied place to place. Many people started burying their dead in cemeteries separate from living spaces and erecting funeral mounds. Some buried their dead with grave goods such as shell gorgets, copper and shell beads, stone pipes, birdstones, bannerstones, and other tools and ornaments.

Near the end of the Archaic period, about 1500 BC, some Iroquois people split off and traveled south to live with the Cherokee. At the same time, people in Georgia and Florida began to use pottery. Pueblo people in the American Southwest also began to farm corn and beans that they had gotten from people in Mexico.