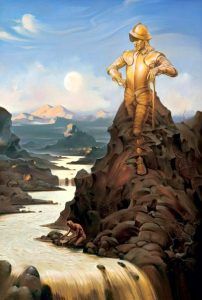 Until mining became a systematic business, prospectors were dissatisfied with the smaller deposits of precious metal and dreamed of golden hills farther away. The unknown regions beyond the Rocky Mountains were filled by imagination with magnificent possibilities, and it was the hope of the miner to penetrate the wilderness, “strike it rich,” and “make his pile.”

Thus, the region indicated as “over the divide” meaning the continental water-shed-or “over the range” came to signify not a delectable land alone, but a sum of delectable conditions, and, ultimately, the goal of posthumous delights. Hence the phrase in use today: “Poor Bill! He’s gone over the divide.”

The Indian’s name of heaven–“the happy hunting ground” — is of similar significance, and among many of the tribes, it had a definite place in the far Southwest, to which their souls were carried on cobweb floats. Just before reaching it they came to a dark river that had to be crossed on a log. If they had been good in the world of the living they suffered no harm from the rocks and surges, but if their lives had been evil they never reached the farther shore, for they were swept into a place of whirlpools, where, forever and ever, they were tossed on the torrent amid thousands of clinging, stinging snakes and shoals of putrid fish. From the far North and East, the Milky Way was the star-path across the divide. 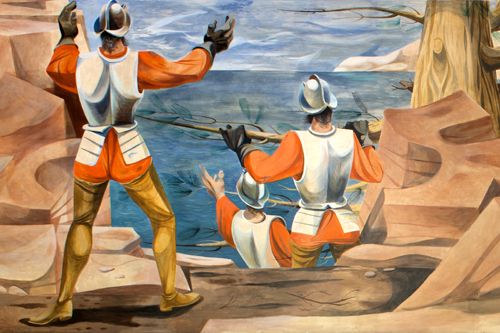