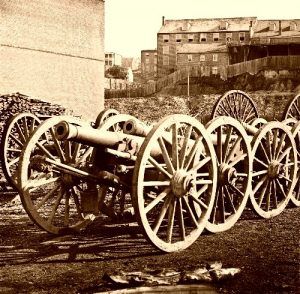 Most of an army is made up not of fighters, but of units whose job is to support the fighters. Modern armies and Civil War armies are a part of modern warfare, consume enormous amounts of everything. Whether in camp or in the field, armies consume tons of food and water every day; not just people do all this consuming, either. The tens of thousands of animals that provided mobility for the cavalry and artillery needed to be fed as well. Anyone who has ever had to feed even one horse or cow knows how much forage it takes every day to keep them happy. In battle, an army consumes ammunition at incredible rates; consequently, men are killed or wounded at very high rates.

In the general mess that is war, someone has to haul every bite of food and every bullet and cannonball fired. Someone has to provide clothes, shoes (for horses and men), equipment and repair or replace whatever is broken.

The quartermaster (called a logistician today) had the unromantic but all-important job of providing everything an army needs to fight. The quartermaster supervised the supply trains (the long train of wagons) that followed the army on the march. In the Union army, the standard was 25 wagons for every thousand men. The medical corps treated casualties (the sick, dead and wounded), taking them from the battlefield, burying the dead and evacuating the wounded or sick to the rear for treatment and (the all too rare) recovery. 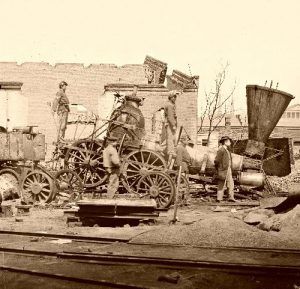 A crippled train in Richmond, Virginia

Orders for the movement of armies and combat information were passed through the signal troops, who maintained the critical lines of communication for the army. In the Civil War, these troops used signal flags, mirrors, torches, balloons, couriers and the telegraph to pass orders and instructions. Throughout the war, both sides established a highly organized system of communication that went from the national leaders to the armies in the field and down to the company level – and back up again. For the first time in the history of warfare, the telegraph became an indispensable means of almost instantaneous communication. It allowed Presidents Davis and Lincoln an unprecedented opportunity to maintain contact with generals in the field. The telegraph also allowed them at times to meddle in their generals’ affairs. The armchair strategists in Richmond and Washington also enjoyed using the telegraph to provide field generals with commentary and criticism. Civil War leaders were the first to discover what people today know all too well: Communications technology can be both a blessing and a curse.

About the Author: Michael Russell Your Independent guide to Civil War. Additionally, Mr. Russell has been involved in online business since early 2001, and while spending countless hours each month running his business still finds time for various hobbies and interests. Article Source: Ezine Articles