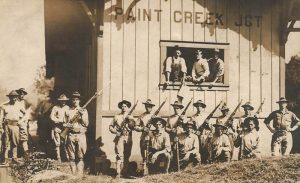 The West Virginia mine wars, also known as the “coal wars,” were conflicts that arose out of disputes between coal companies and miners.

Coal mining began in West Virginia in the mid-1800s. The bituminous coal soon became the fuel of choice for industrial production across America and surged by the century’s end. By the early 1900s, coal was powering many industries, including railroads, streetcars, and heating for homes and businesses. 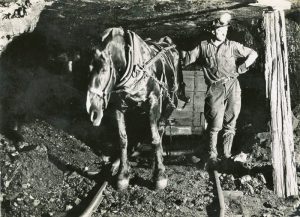 Coal Miner and Horse in West Virginia Mine.

With coal becoming indispensable, the mine owners and operators were often setting record revenues. However, the industry was disorganized, decentralized, and often ruled by boom-and-bust cycles.

While the mine owners were focused on market competition, they ignored the plight of the workers who generated their revenue. Below ground, the miners withstood some of the worst working conditions in America and suffered some of the highest fatality rates among industrial workers. Some West Virginian coal miners joined the United Mine Workers (UMW) in response to wage reductions following The Panic of 1893.

During the early 1900s, scores of miners died from roof collapses, explosions, and fires every year, and frequent large-scale disasters. The mine safety laws in West Virginia were the weakest in the country, and what laws did exist had few if any provisions to ensure their enforcement. Between 1890 and 1912, West Virginia mines had the highest miner death rates in the country. 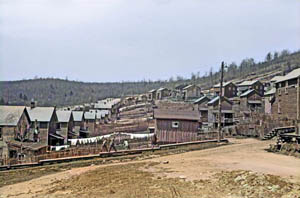 Above ground, the miners dealt with brutal mine guards and a guard system that controlled the politics and economy of the region. They also contended with low pay, long hours, and the exploitation of living in company-owned towns. These towns required their workers to rent and live in company-owned houses, and the miners were often paid in “coal scrip,” paper notes issued by mining companies that could only be redeemed at company-owned stores.

At this time, mineworkers first began organizing and unionizing. However, the mine owners and coal operators fiercely resisted any attempts at unionization. This led to a series of escalating conflicts known as the Mine Wars, which pitted miners against the powerful forces of mining companies and their hired agents.

During the outset of what became known as the West Virginia mine wars, the trouble centered in the towns along Paint and Cabin Creeks in 1912-1913 in Kanawha County. This strike demanded better pay and work conditions, the right to trade where they pleased rather than being forced to buy from company-owned stores, and recognition of the United Mine Workers (UMW).

But the mining companies, refusing to meet the workers’ demands, hired Baldwin-Felts agents to guard the mines and act as strikebreakers. Once the Agents arrived, carrying high-powered rifles, many of the miners either moved out or were evicted from the company houses they had been renting from the coal companies and moved into coal camps supported by the Union. The strike resulted in machine-gun warfare and a state of martial law declared by the West Virginia governor.

The Battle of Matewan transpired in 1920 after hundreds more miners unionized, resulting in the mining company sending agents to Matewan to evict the miners’ families. The town mayor and the police chief took the miners’ side, and in the end, a shootout resulted in ten men’s deaths. 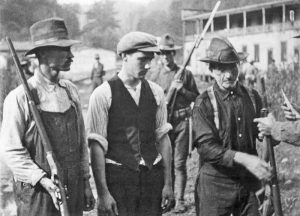 In 1921, the mine wars came to a bloody climax in the Battle of Blair Mountain. After mine company agents assassinated Sid Hatfield on the steps of the McDowell County Courthouse, thousands of armed pro-union miners marched into Logan County in late August. Marching from the town of Marmet, the men planned to march 60 miles to Mingo County, where they sought to free striking miners who had been arrested after the governor declared martial law. However, they had to cross Blair Mountain, a mountain ridge defended by the notorious anti-union Logan County Sheriff Don Chafin. When they arrived in Logan County, they were met by militia, police, and company agents with machine guns and makeshift “bombs” dropped from rented aircraft. The guerilla warfare claimed the lives of about 100 men and only ended when President Warren Harding sent 2,500 federal troops in. Once the military intervened, the miners laid down their weapons, and the fighting ended. Outside the Civil War, Blair Mountain is the largest armed insurrection in American history.

While the Battle of Blair Mountain marked the end of open violence, it was not the end of the miners’ struggles. In the Spring of 1922, the state of West Virginia, working in collaboration with private coal companies, indicted over 500 pro-union marchers on charges of treason against the state of West Virginia, murder, accessory to murder, and conspiracy to commit murder. Extensive national newspaper coverage of the first trial that of defendant Bill Blizzard revealed the lengths to which coal operators and state officials worked together to prevent the workers from organizing. 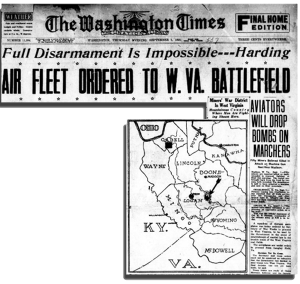 Though hundreds of miners were later acquitted on charges of murder and treason, the Battle of Blair Mountain stalled the United Mine Workers’ (UMV) efforts in southern West Virginia and caused membership to plummet. The message of the mine wars treason trials was clear: if workers fighting for their rights could be found guilty of treason against the state of West Virginia, a similar fate could befall workers anywhere. These trials also marked the last gasp of the push to unionize the coalfields at that time.

It wouldn’t be until President Franklin D. Roosevelt granted workers a guarantee to collectively bargain in 1933 that miners began to join the union again. UMW membership peaked in 1946, then spiraled downward as unions lost government support and the industry waged an all-out war on union mines. The numbers kept falling as the industry in the Appalachian coalfields declined.