Despite obvious differences between the women who traveled with Anza and the Anglo-American women when it came to divorce, there were many similarities in the two waves of migration. Women in both groups experienced birth, miscarriages, and death; few females traveled outside of their family unit; there were hardships, deprivation, and continual exposure to extremes in temperature and weather conditions; and the women were expected to cook, wash the clothing, nurse the sick, and carry and tend to their children. 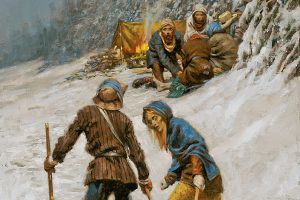 The Donner Party by Andy Thomas

The degree to which they suffered, however, was dramatically different. Those traveling westward in the mid-nineteenth century lacked the cohesion and leadership found in the Anza expedition. Attempted shortcuts and turnoffs on the trail resulted in disasters such as the one suffered by the Donner Party. In addition, cholera was rampant and the way became lined with the graves of those who had died from measles, dysentery, smallpox, and fevers. Infant mortality played a significant role in the loss of life, and contaminated water and spoiled food contributed to the overall misery and deaths of others. One diarist, Cecelia McMillen Adams, morbidly recorded over two hundred grave sites along the trail from Illinois in 1852.

Superior planning included blazing the trail that was taken, maintaining good relations with the Indians, and properly equipping the participants. The Spanish specifically recruited persons deemed most suitable for the journey and life on the frontier, an advantage the Anglo-Americans on the westward trail did not enjoy. While the Anza expedition was a small and relatively cohesive group, the forty-niners were an unstructured collection of thousands of individuals and families that lacked leadership and experience on the difficult journey west. With the exception of the evening when Father Pedro Font was critical of Anza’s decision to provide liquor for the Fandango rather than say prayers of thanksgiving, and the young widow entertained the group with her bawdy song, conflict among the Spanish leaders and rank and file was expressed primarily by writing in personal journals. Compared to the tales of crime and punishment that took place along the trail of the forty-niners, the Anza group was peaceful and well disciplined.

Spanish success in California was short-lived, however, as the outpost of empire fell first to the Mexicans and then to the Americans. In the span of 80 years, the days of Hispanic supremacy were over as the American government implemented Manifest Destiny and solidified its conquest by changing property laws, including those that had enabled women to inherit, own, buy, and sell land, and that permitted them to enjoy the profits made in the course of a marriage through community property. Despite prolonged litigation, most Hispanic landowners eventually lost their holdings, large and small, and the process of marginalization of those not of Anglo ancestry began. Increasingly isolated by language and culture, the people of Spanish and Mexican extraction, and those of African origin, as well as the original Californians—the Native Americans—moved into the economic and social shadows.

Perhaps new studies of the earliest residents of the Golden State will return strong, independent women such as Maria Feliciana Arballo, Eulalia Callis, and Apolinaria Lorenzana to their rightful place in a widened mainstream of American history.

Source: “Women on the Move: Overland Journeys to California.” Patricia Molen van Ee, Geography and Map Division, Library of Congress, 2001. American Memory. The article as it appears above is not verbatim, it has been heavily edited and truncated.