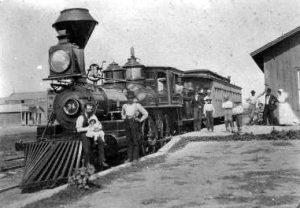 Hays City, Kansas, on the Kansas Pacific Railroad, about 150 miles east of the Colorado line, was also one of the noted “bad” towns of the West. Some trail-cattle from the South were driven there for shipment eastward before the construction of the more southerly Santa Fe Railroad had intercepted the trade However, Hays City was a cow-and-railroad combination of nearly 2,000 inhabitants, but most of them hardly could be called citizens. About a hundred gambling dens flourished there, saloons were next to innumerable, and all the other appendages of such places were in great plenty; while shooting-affrays, often of fatal termination, were of daily and nightly occurrence. Wild Bill Hickok was Marshal of Hays City before he went to Abilene to take charge of that town; and in about year added, while in the discharge of his duties, a half-dozen or so to the number of men he had sent out of the world with his incredibly ready revolver. In the northern parts of the range-cattle country, no cowtowns comparable with Abilene or Dodge City ever were developed, although there were several “cities” in that direction in which daily life was not stagnated form of existence. Among these were Cheyenne and Laramie City in Wyoming. However, their reputations for wildness in these good old times to a large extent were due to conditions having no relation to the cattle business.

Cheyenne, Wyoming was railroad center and also the rendezvous of a swarm of land pirates and other ruffians of every degree; and of its business, the cattle trade, while it was large, formed only a part, and therefore was not wholly responsible for the character of the town. But the place had, nevertheless, ample facilities for entertaining visitors who had trailed in from the ranges, as many poor fellow learned to his undoing. Laramie was nearer to the real thing, as measured by the Abilene standard or by that of Dodge City, but as it was the headquarters for an important part of the Union Pacific Railroad’s operative administration it also was not altogether cowtown. While it was rough and tough enough, much of its fame over the country, especially in the East, as a “bad” place, was due to the whimsical exaggerations of “Bill” Nye in his newspaper, the Laramie Boomerang. In the main, however, Laramie depended for its support upon the business of the stockmen, being the outlet for a large region of range country.

Miles City, Montana, attained modified distinction in the cowtown line, having for several years held forth most of the usual cowtown “attractions.” But its sphere of influence was local in extent, and furthermore garishness was not quite so effective upon the general run of the northern range men as upon those of the South, who made pilgrimages to the old wool-bearing cattle-towns of Kansas; for it is to be remembered that the cattlemen, including the cowboys, of the far-Northern ranges, as a class were more conservative in many ways than were those of the central and of the southern parts of the range country.

President Roosevelt, writing in the middle 1880s, referred to Miles City as being “a true cow town,” but apparently he did not mean the kind of cowtown with which we have been dealing here; not such as the all-wool-and-more-than-a-yard-wide Abilene, or Dodge City, of the earlier period. It is certain that neither of these in the days of its cowtown “glory” would have stood for any such tame diversions as horse races. Of his impressions of Miles City and of the people he saw there in the middle 1880s, Mr. Roosevelt, in his “Ranch Life and the Hunting Trail,” said: 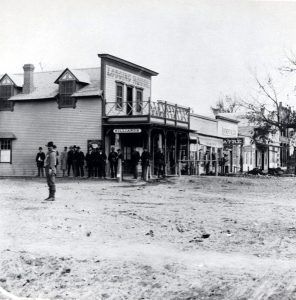 “A true ‘cowtown’ is worth seeing, — such a one as Miles City, for instance, especially at the time of the annual meeting of the great Montana Stock-raisers’ Association. Then the whole place is full to overflowing, the importance of the meeting and the fun of the attendant frolics, especially the horse races, drawing from the surrounding ranch country many hundreds of men of every degree, from the rich stock-owner with his millions to the ordinary cowboy who works for forty dollars month. It would be impossible to imagine a more typically American assemblage, for although there are always certain number of foreigners, usually English, Irish, and German, yet they have become completely Americanized; and on the whole, it would be difficult to gather a finer body of men, in spite of their numerous shortcomings.”

Texas, the great patron of the whopping old cowtowns of Kansas, had nothing like them herself. The Missouri, Kansas Texas Railroad, the first line to Texas from the North, was completed into the northeastern part of that State in the beginning of 1873, and by the autumn of that year, it and its connections afforded a very direct route through to Chicago. Gainesville and Fort Worth soon became important cattle shipping points, but they were not characterized by vice, lawlessness, and crime; and the same may be said of several other Texas towns that later became prominent in the cattle shipping trade. Of course, these towns were not free from disorder, but what they had of it was incidental and not dominant.

In after-times, when the great western and northwestern range regions of Texas became occupied, some of the hamlets and little towns that were widely scattered over the vast expanse of country, and served merely local constituencies, were, in proportion to their small size, the scenes of much dissipation and of many sudden deaths. Tascosa, Texas where the Fort Worth and Denver City Railroad crossed the Canadian River, was an unusually illustrious example of this type of range cowtown; a type, however, that was common in the 1880s in most parts of the range country from the Mexican border to the Canadian boundary. Tascosa provided itself with a graveyard on the swell in the prairie nearby, and the character of the town was reflected in what was asserted as fact, that graves for more than 50 men had been dug there before the first was made for one who had not died with his boots on. Hence, the prairie swell very appropriately was called “Boot Hill,” as it is known to this day.

Boot Hill! We may smile at the humorous grimness of the name, but after doing so we should think of the tragedies for which it stands, and hear in mind that, while the town of village dimensions has its graveyard that was “started” in this manner, each of the “wild and woolly” cowtowns that have been recalled on these pages had its more populous Boot Hill. Nor were all the tenants of these various Boot Hills “bad” men. The moldering bones of many poor cowboys whose only “badness” was his recklessness amid scenes that were so different from those of his life on the great lonely range and on the trail, lie in these Boot Hills; of brave and generous men who would, as most of them had done, willingly have risked their lives for the sake of their comrades without ever a thought of heroics. Along with these tenants of the Boot Hills, rest what is left of many other poor fellows whose lives were snuffed out by brawlers and professional “bad men” who were without provocation for adding to the crimes that already had blackened and outlawed them.

But, the wild and woolly railroad cowtown long has been extinct, and the little hamlets and villages of the range country have mended their manners greatly. While the former was the offspring of railroads, it was the further extension of railroads that deprived them of their “glory” and caused them to become orderly, sober-minded, and substantial communities. Almost every station on every railroad traversing the western cattle country became a shipping point for its neighborhood, and so the business that had been concentrated at these primitive centers was widely distributed.

As to the villages and hamlets, it is not to be understood that they have taken on a Puritanic character, but they have, to a marked degree been changed by the influence of the more exacting and more business-like methods that have prevailed in the range cattle industry during the last decades of the 19th century. They contain a general store, usually that of some sedate “mercantile company,” or perhaps two or three of these, the post office, a hotel bearing a pretentious name that inspires hopes destined soon to be cast down; and, invariably, several “places” in which the inner man may be spiritually refreshed. But, they are far away from the wild and woolly of old times.

In the memories of veteran cattlemen who recalled, from personal observation, the scenes, tragedies, and incidents of life in such places as Abilene and Dodge City, when these were their worst as railroad cowtowns, time has never softened the hideousness of the uproar, turmoil, vice, and crime that were in command; nor could these men place themselves in sympathy with any attempt of the story maker to veil the horrible conditions in an atmosphere of romance. 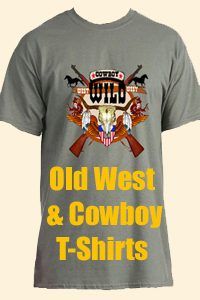 About the Article: The content of this article was excerpted from the Prose and Poetry of the Live Stock Industry of the United States, Volume 1, authored and prepared by the National Live Stock Historical Association; 1905, Franklin Hudson Publishing Company, Kansas City, Missouri.