The scout’s story of swimming the river ought, perhaps, to have satisfied my curiosity but I was especially desirous to hear him relate the history of a sanguinary fight which he had with a party of ruffians in the early part of the war, when, single-handed, he fought and killed ten men. I had heard the story as it came from an officer of the regular army who, an hour after the affair, saw Bill and the ten dead men, some killed with bullets, others hacked and slashed to death with a knife.

As I write out the details of this terrible tale from notes which I took as the words fell from the scout’s lips, I am conscious of its extreme improbability; but while I listened to him I remembered the story in the Bible, where we are told that Samson with the jawbone of an ass slew a thousand men, and as I looked upon this magnificent example of human strength and daring, he appeared to me to realize the powers of a Samson and Hercules combined, and I should not have been inclined to place any limit on his achievements. Besides this, one who has lived for four years in the presence of such grand heroism and deeds of prowess as was seen during the war is in what might he called a receptive mood. Be the story true or not, in part, or in whole, I believed then every word Wild Bill uttered, and I believe it today.

“I don’t like to talk about that McCanles affair,” said Bill, in answer to my question.

“It gives me a queer shiver whenever I think of it, and sometimes I dream about it, and wake up in a cold sweat.”

“You see this McCanles was the Captain of a gang of desperadoes, horse-thieves, murderers, regular cut-throats, who were the terror of every body on the border, and who kept us in the mountains in hot water whenever they were around. I knew them all in the mountains where they pretended to be trapping, but they were there hiding from the hangman. McCanles was the biggest scoundrel and bully of them all, and was allers a-braggin of what he could do. One day I beat him shootin at a mark, and then threw him at the back-bolt. And I didn’t drop him as soft as you would a baby, you may be sure. Well, he got savage mad about it, and swore he would have his revenge on me some time.”

“This was just before the war broke out, and we were already takin sides in the mountains either for the South or the Union. McCanles and his gang were border-ruffians in the Kansasrow, and of course they went with the rebs. Bime-by he clar’d out, and I shouldn’t have thought of the feller agin ef he hadn’t crossed my path. It ‘pears he didn’t forget me.”

“It was in ‘61, when I guided a detachment of cavalry who were commin from Camp Floyd. We had nearly reached the Kansas line, and were in South Nebraska, when one afternoon I went out of camp to go to the cabin of an old friend of mine, a Mrs. Wellman. I took only one of my revolvers with me, for although the war had broke out I didn’t think it necessary to carry both my pistols, and, in all or’nary scrimmages, one is better than a dozen, if you shoot straight. I saw some wild turkeys on the road as I was goin down, and popped one of ‘em over, thinking he’d he just the thing for supper.”

“Well, I rode up to Mrs. Wellman, jumped off my horse, and went into the cabin, which is like most of the cabins on the prarer, with only one room, and that had two doors, one opening in front and t’other on a yard, like.” 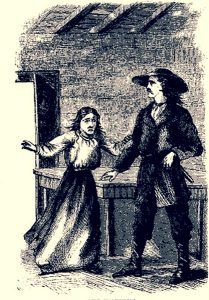 “How are you, Mrs. Wellman?” I said, feeling as jolly as you please.

“’It’s McCanles and his gang. There’s ten of them, and you’ve no chance. They’ve jes gone down the road to the corn-rack. They came up here only five minutes ago. McCanles was draggin poor Parson Shipley on the ground with a lariat round his neck. The preacher was most dead with choking and the horses stamping on him. McCanles knows yer bringin in that party of Yankee cavalry, and he swears he’ll cut yer heart out. Run, Bill, run! But it’s too late; they’re commin up the lane’”

“While she was a-talkin I remembered I had but one revolver, and a load gone out of that. On the table there was a horn of powder and some little bars of lead. I poured some powder into the empty chamber and rammed the lead after it by hammering the barrel on the table, and had just capped the pistol when I heard McCanles shout: ‘There’s that d—d Yank Wild Bill’shorse; he’s here; and we’ll skin him alive!’”

“If I had thought of runnin before, it war too late now, and the house was my best holt –a sort of fortress, like. I never thought I should leave that room alive.”

The scout stopped in his story, rose from his seat, and strode back and forward in a state of great excitement. 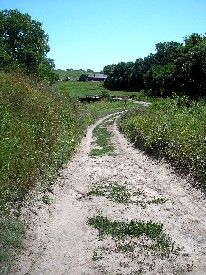 “I tell you what it is, Kernel,” he resumed, after a while, “I don’t mind a scrimmage with these fellers round here. Shoot one or two of them and the rest run away. But all of McCanles’ Gang were reckless, blood-thirsty devils, who would fight as long as they had strength to pull a trigger. I have been in tight places, but that’s one of the few times I said my prayers.”

“Surround the house and give him no quarter!’ yelled McCanles. When I heard that I felt as quiet and cool as if I was a-goin to church. I looked round the room and saw a Hawkins rifle hangin over the bed.”

“Is that loaded?” I said to Mrs. Wellman.

“’Yes,’ the poor thing whispered. She was so frightened she couldn’t speak out loud.”

“’Are you sure?’ I said, as I jumped to the bed and caught it from its hooks. Although may eye did not leave the door, yet I could see she nodded Yes again. I put the revolver on the bed, and just then McCanles poked his head inside the doorway, but jumped back when he saw me with the rifle in my hand.”