A cloud passed over the speaker’s face for a moment as he continued:

“And there was a cause of quarrel between us which people round here don’t know about, One of us had to die; and the secret died with him.”

“Why did you not wait to see if your ball had hit him? Why did you turn round so quickly?”

The scout fixed his gray eyes on mine, striking his leg with his riding-whip, as he answered,  “I knew he was a dead man. I never miss a shot. I turned on the crowd because I was sure they would shoot me if they saw him fall.”

“The people about here tell me you are a quiet, civil man. How is it you get into these fights?”

“D—-d if I can tell,” he replied, with a puzzled look which at once gave place to a proud defiant expression as he continued – “but you know a man must defend his honor.”

“Yes, I admitted, with some hesitation, remembering that I was not in Boston but on the border, and that the code of honor and mode of redress differ slightly in the one place from those of the other.

One of the reasons for my desire to make the acquaintance of Wild Bill was to obtain from his own lips a true account of some of the adventures related of him. It was not an easy matter. It was hard to overcome the reticence which marks men who have lived the wild mountain life, and which was one of his valuable qualifications as a scout. Finally he said:

“I hardly know where to begin. Pretty near all these stories are true. I was at it all the war. That affair of my swimming the river took place on that long scout of mine when I was with the rebels five months, when I was sent by General Curtis to Price’s army. Things had come pretty close at that time, and it wasn’t safe to go straight inter their lines. Everybody was suspected who came from these parts. So I started off and went way up to Kansas City. I bought a horse there and struck out onto the plains, and then went down through Southern Kansas into Arkansas. I knew a rebel named Barnes, who was killed at Pea Ridge. He was from near Austin in Texas. So I called myself his brother and enlisted in a regiment of mounted rangers.”

“General Price was just then getting ready for a raid into Missouri. It was sometime before we got into the campaign, and it was mighty hard work for me. The men of our regiment were awful. They didn’t mind killing a man no more than a hog. The officers had no command over them. They were afraid of their own men, and let them do what they liked; so they would rob and sometimes murder their own people. It was right hard for me to keep up with them, and not do as they did. I never let on that I was a good shot. I kept that back for big occasions; but ef you’d heard me swear and cuss the blue-bellies, you’d a-thought me one of the wickedest of the whole crew. So it went on until we came near Curtis’s army. Bime-by they were on one side of the Sandy River and we were on t’other. All the time I had been getting information until I knew every regiment and its strength; how much cavalry there was, and how many guns the artillery had. ”

“You see ‘twas time for me to go, but it wasn’t easy to git out, for the river was close picketed on both sides. One day when I was on picket our men and the rebels got talking and cussin each other, as you know they used to do. After a while one of the Union men offered to exchange some coffee for tobacco. So we went out onto a little island which was neutral ground like. The minute I saw the other party, who belonged to the Missouri cavalry, we recognized each other. I was awful afraid they’d let on. So I blurted out:

’Now, Yanks, let’s see yer coffee — no burnt beans, mind yer but the genuine stuff. We know the real article if we is Texans .’”

“The boys kept mum, and we separated. Half an hour afterward General Curtis knew I was with the rebs. But how to git across the river was what stumped me. After that, when I was on picket, I didn’t trouble myself about being shot. I used to fire at our boys, and they’d bang away at me, each of us taking good care to shoot wide. But how to git over the river was the bother. At last, after thinking a heap about it, I came to the conclusion that I always did, that the boldest plan is the best and safest.”

“We had a big sergeant in our company who was alms a-braggin that he could stump any man in the regiment. He swore he had killed more Yanks than any man in the army, and that he could do more daring things than any others. So one day when he was talking loud I took him up, and offered to bet horse for horse that I would ride out into the open, and nearer to the Yankees than he. He tried to back out of this, but the men raised a row, calling him a funk, and a bragger, and all that; so he had to go. Well, we mounted our horses, but before we came within shootin’ distance of the Union soldiers I made my horse kick and rear so that they could see who I was. Then we rode slowly to the river bank, side by side.”

“There must have been ten thousand men watching us; for, besides the rebs who wouldn’t have cried about it if we had both been killed, our boys saw something was up, and without being seen thousands of them came down to the river. Their pickets kept firing at the sergeant; but whether or not they were afraid of putting a ball through me I don’t know, but nary a shot hit him. He was a plucky feller all the same, for the bullets zitted about in every direction.”

“Bime-by we got right close ter the river, when one of the Yankee soldiers yelled out, ‘Bully for Wild Bill’”

“Then the sergeant suspicioned me, for he turned on me and growled out, ‘By God, I believe yer a Yank!’ And he at onst drew his revolver; but he was too late, for the minute he drew his pistol I put a ball through him. I mightn’t have killed him if he hadn’t suspicioned me. I had to do it then.” 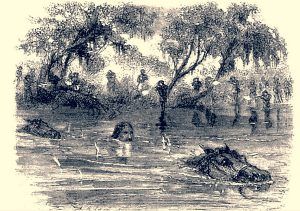 Hickok and his horse in the water, illustration from Harper’s New Monthly Magazine, February, 1867.

“As he rolled out of the saddle I took his horse by the bit, and dashed into the water as quick as I could. The minute I shot the sergeant our boys set up a tremendous shout, and opened a smashing fire on the rebs who had commenced popping at me. But I had got into deep water, and had slipped off my horse over his back, and steered him for the opposite bank by holding onto his tail with one hand, while I held the bridle rein of the sergeant’s horse in the other hand. It was the hottest bath I ever took. Whew! For about two minutes how the bullets zitted and skipped on the water. I thought I was hit again and again, but the reb sharp-shooters were bothered by the splash we made, and in a little while our boys drove them to cover, and after some tumbling at the bank got into the brush with my two horses without a scratch.”

“It is a fact,” said the scout, while he caressed his long hair,” I felt sort of proud when the boys took me into camp, and General Curtis thanked me before a heap of generals.”

“But I never tried that thing over again; nor I didn’t go a scouting openly in Price’s army after that. They all knew me too well, and you see ‘twouldn’t be healthy to have been caught.”