The story of the duel was yet fresh from the lips of the Captain when its hero appeared in the manner already described. After a few moments conversation Bill excused himself, saying:

“I am going out on the prarer a piece to see the sick wife of my mate. I should be glad to meet yer at the hotel this afternoon, Kernel.”

“I will go there to meet you,” I replied.

“Good-day, gentlemen,” said the scout, as he saluted the party; and mounting the black horse who had been standing quiet, unhitched, he waved his hand over the animals head. Responsive to the signal, she shot forward as the arrow leaves the bow, and they both disappeared up the road in a cloud of dust.

I went to the hotel during the afternoon to keep the scout’s appointment. The large room of the hotel in Springfield is perhaps the central point of attraction in the city. It fronted on the street, and served in several capacities. It was a sort of exchange for those who had nothing better to do than to go there. It was reception-room, parlor, and office; but its distinguished and most fascinating characteristic was the bar, which occupied one entire end of the apartment. Technically, the “bar” is the counter upon which the polite official places his viands. Practically, the bar is represented in the long rows of bottles, and cut-glass decanters, and the glasses and goblets of all shapes and sizes suited to the various liquors to be imbibed. What a charming and artistic display it was of elongated transparent vessels containing every known drinkable fluid, from native Bourbon to imported Lacryma Christi!

The room, in its way, was a temple of art. All sorts of pictures budded and blossomed and blushed from the walls. Sixpenny portraits of the Presidents encoffined in pine-wood frames; Mazeppa appeared in the four phases of his celebrated one-horse act; while a lithograph of “Mary Ann” smiled and simpered in spite of the stains of tobacco-juice which had been unsparingly bestowed upon her countenance. But the hanging committee of this un-designed academy seemed to have been prejudiced as all hanging committees of good taste might well be — in favor of Harper’s Weekly; for the walls of the room were well covered with wood-cuts cut from that journal. Portraits of noted generals and statesmen, knaves and politicians, with bounteous illustrations of battles and skirmishes, from Bull Run number one to Dinwiddie Court House. And the simple-hearted comers and goers of Springfield looked upon, wondered, and admired these pictorial descriptions fully as much as if they had been the masterpieces of a Yvon or Vernet.

A billiard-table, old and out of use, where caroms seemed to have been made quite as often with lead as ivory balls, stood in the centre of the room. A dozen chairs filled up the complement of the furniture. The appearance of the party of men assembled there, who sat with their slovenly shod feet dangling over the arms of the chairs or hung about the porch outside, was in perfect harmony with the time and place.

All of them religiously obeyed the two before-mentioned, characteristics of the people of the city — their hair was long and tangled, and each man fulfilled the most exalted requirement of laziness.

I was taking a mental inventory of all this when a cry and murmur drew my attention to the outside of the house, when I saw Wild Bill riding up the street at a swift gallop. Arrived opposite to the hotel, he swung his right arm around with a circular motion. Black Nell instantly stopped and dropped to the ground as if a cannon-ball had knocked life out of her. Bill left her there, stretched upon the ground, and joined the group of observers on the porch.

“Black Nell hasn’t forgot her old tricks,” said one of them.

“No,” answered the scout. “God bless her! She is wiser and truer than most men I know of. That mare will do any thing for me. Wont you, Nelly?” The mare winked affirmatively the only eye we could see. 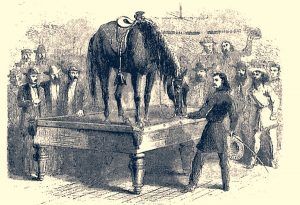 “Wise!” continued her master; “why, she knows more than a judge. I’ll bet the drinks for the party that sh’ell walk up these steps and into the room and climb up on the billiard-table and lie down.”

The bet was taken at once, not because anyone doubted the capabilities of the mare, but there was excitement in the thing without exercise.

Bill whistled in a low tone. Nell instantly scrambled to her feet, walked toward him, put her nose affectionately under his arm, followed him into the room, and to my extreme wonderment climbed upon the billiard-table, to the extreme astonishment of the table no doubt, for it groaned under the weight of the four-legged animal and several of those who were simply bifurcated, and whom Nell permitted to sit upon her. When she got down from the table, which was as graceful a performance as might be expected under the circumstances, Bill sprang upon her back, dashed through the high wide doorway, and at a single bound cleared the flight of steps and landed in the middle of the street.

The scout then dismounted, snapped his riding-whip, and the noble beast bounded off down the street, rearing and plunging to her own intense satisfaction. A kindly-disposed individual, who must have been a stranger, supposing the mare was running away, tried to catch her, when she stopped, and as if she resented his impertinence, let fly her heels at him and then quietly trotted to her stable.

“Black Nell has carried me along through many a tight place,” said the scout, as we walked toward my quarters. “She trains easier than any animal I ever saw. That trick of dropping quick which you saw has saved my life time and again. When I have been out scouting on the prairie or in the woods I have come across parties of rebels, and have dropped out of sight in the tall grass before they saw us. One day a gang of rebs who had been hunting for me, and thought they had my track, halted for half an hour within fifty yards of us. Nell laid as close as a rabbit, and didn’t even whisk her tail to keep the flies off; until the rebs moved off, supposing they were on the wrong scent. The mare will come at my whistle and foller me about just like a dog. She won’t mind anyone else, nor allow them to mount her, and will kick a harness and wagon all ter pieces ef you try to hitch her in one. And she’s right, Kernel,” added Bill, with the enthusiasm of a true lover of a horse sparkling in his eyes. “A hoss is too noble a beast to be degraded by such toggery. Harness mules and oxen, but give a hoss a chance ter run.”

I had a curiosity, which was not an idle one to hear what this man had to say about his duel with Tutt, and I asked him:

“Do you not regret killing Tutt? You surely do not like to kill men?”

“As ter killing men,” he replied, “I never thought much about it. The most of the men I have killed it was one or the other of us, and at sich times you don’t stop to think; and what’s the use after it’s all over? As for Tutt, I had rather not have killed him, for I want ter settle down quiet here now. But thar’s been hard feeling between us a long while. I wanted ter keep out of that fight; hut he tried to degrade me, and I couldn’t stand that, you know, for I am a fighting man, you know.”