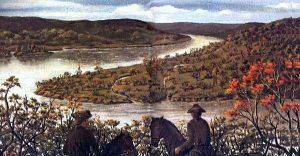 The Indian title to a large part of the territory of Ohio having become extinguished, Congress, before settlements were commenced, found it necessary to pass ordinances for the survey and sale of the lands in the Northwest Territory. In October 1787, Manasseh Cutler and Winthrop Sargeant, agents of the New England Ohio Company, made a large purchase of land, bounded south by the Ohio River, and west by the Scioto River. Its settlement was commenced at Marietta in the spring of 1788, which was the first made by the Americans within Ohio. A settlement had been attempted within the limits of Ohio, on the site of Portsmouth, in April 1785, by four families from Redstone, Pennsylvania, but difficulties with the Indians compelled its abandonment.

About the time of the settlement of Marietta, Congress appointed General Arthur St. Clair, Governor; Winthrop Sargeant, Secretary; and Samuel Holden Parsons, James M. Varnum, and John Cleves Symmes, Judges in and over the Territory. They organized its government and passed laws, and the governor erected the county of Washington, embracing nearly the whole of the eastern half of the present limits of Ohio.

In November 1788, the second settlement within the limits of Ohio was commenced at Columbia, on the Ohio River, five miles above the site of Cincinnati, and within the purchase and under the auspices of John Cleves Symmes and associates. Shortly after, settlements were commenced at Cincinnati and at North Bend, sixteen miles below, both within Symmes’s purchase. In 1790, another settlement was made at Galliopolis by a colony from France — the name signifying city of the French.

On January 9, 1789, a treaty was concluded at Fort Harmer, at the mouth of the Muskingum River, opposite Marietta, by Governor St. Clair, in which the treaty, which had been made four years previous, at Fort McIntosh, on the site of Beaver, Pennsylvania, was renewed and confirmed. It did not, however, produce the favorable results anticipated. The Indians, the same year, committed numerous murders, which occasioned the alarmed settlers to erect block-houses in each of the new settlements. In June, Major Doughty, with 140 men, commenced the erection of Fort Washington, on the site of Cincinnati. In the course of the summer, General Josiah Harmer arrived at the Fort with 300 men.

Negotiations with the Indians proving unfavorable, General Josiah Harmer marched in September 1790, from Cincinnati with 1,300 men, less than one-fourth of whom were regulars, to attack their towns on the Maumee River. He succeeded in burning their towns; but in an engagement with the Indians, part of his troops met with a severe loss. The next year, a larger army was assembled at Cincinnati, under General St. Clair, composed of about 3,000 men. With this force, he commenced his march toward the Indian towns on the Maumee River. Early in the morning of November 4, 1791, his army, while in camp on what is now the line of Darke and Mercer Counties, within three miles of the Indiana line, and about 70 miles north from Cincinnati, was surprised by a large body of Indians, and defeated with terrible slaughter. A third army, under General Anthony Wayne, was organized. On August 20, 1794, they met and completely defeated the Indians, on the Maumee River, about 12 miles south of the site of Toledo. The Indians, at length, becoming convinced of their inability to resist the American arms, sued for peace. On August 3, 1795, General Wayne concluded a treaty at Greenville, sixty miles north of Cincinnati, with eleven of the most powerful northwestern tribes, in grand council. This gave peace to the West, of several years’ duration, during which, the settlements progressed with great rapidity. Jay’s Treaty, concluded November 19, 1794, was a most important event to the prosperity of the West. It provided for the withdrawal of all the British troops from the northwestern posts. In 1796, the Northwestern Territory was divided into five counties. Marietta was the seat of justice of Hamilton and Washington counties; Vincennes, of Knox County; Kaskaskia, of St. Clair County; and Detroit, of Wayne County. The settlers, out of the limits of Ohio, were Canadian or Creole French. The headquarters of the northwest army were removed to Detroit, at which point a fort had been built by De la Motte Cadillac, as early as 1701.

Originally, Virginia claimed jurisdiction over a large part of Western Pennsylvania as being within her dominions, yet it was not until after the close of the American Revolution that the boundary line was permanently established. 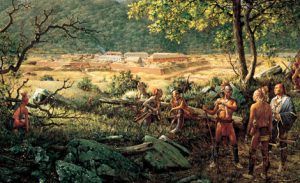 At this period, Fort Pitt was a frontier post, around which had sprung up the village of Pittsburgh, which was not regularly laid out into a town until 1784. The settlement on the Monongahela at “Redstone Old Fort,” or “Fort Burd,” as it originally was called, having become an important point of embarkation for western emigrants, was the next year laid off into a town under the name of Brownsville. Regular forwarding houses were soon established here, by whose lines goods were systematically wagoned over the mountains, thus superseding the slow and tedious mode of transportation by pack-horses, to which the emigrants had previously been obliged to resort.

In July 1786, The Pittsburgh Gazette, the first newspaper issued in the west, was published; the second being the Kentucky Gazette established at Lexington, in August of the next year. As late as 1791, the Alleghany River was the frontier limit of the settlements of Pennsylvania, the Indians holding possession of the region around its northwestern tributaries, with the exception of a few scattering settlements, which were all simultaneously broken up and exterminated in one night in February of this year, by a band of 150 Indians. During the campaigns of Harmer, St. Clair, and Wayne, Pittsburgh was the great depot for the armies.

By this time, agriculture and manufactures had begun to flourish in western Pennsylvania and Virginia, and an extensive trade was carried on with the settlements on the Ohio River and on the lower Mississippi River, with New Orleans and the rich Spanish settlements in its vicinity. Monongahela whiskey, horses, cattle, and agricultural and mechanical implements of iron were the principal articles of export. The Spanish government soon after much embarrassed this trade by imposing heavy duties.  The first settlements in Tennessee were made in the vicinity of Fort Loudon, on the Little Tennessee River, in what is now Monroe County, East Tennessee, about the year 1758. Forts Loudon and Chissel were built at that time by Colonel Byrd, who marched into the Cherokee country with a regiment from Virginia. The next year, war broke out with the Cherokee. In 1760 the Cherokee besieged Fort Loudon, into which the settlers had gathered their families, numbering nearly 300 persons. The latter was obliged to surrender for want of provisions, but, agreeably to the terms of capitulation were to retreat unmolested beyond the Blue Ridge. When they had proceeded about 20 miles on their route, the Indians fell upon them and massacred all but nine, not even sparing the women and children.

The only settlements were thus broken up by this war. The next year, the celebrated Daniel Boone made an excursion from North Carolina to the waters of the Holstein River. In 1766 Colonel James Smith, with five others, traversed a great portion of Middle and West Tennessee. At the mouth of the Tennessee River, Smith’s companions left him to make farther explorations in Illinois, while he, in company with an African-American lad, returned home through the wilderness, after an absence of eleven months, during which he saw “neither bread, money, women, nor spirituous liquors.” 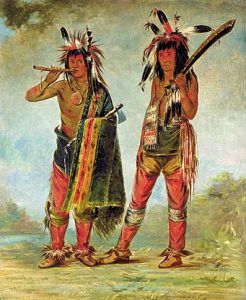 Other explorations soon succeeded, and permanent settlements first made in 1768 and1769, by emigrants from Virginia and North Carolina, who were scattered along the branches of the Holstein, French Broad, and Watauga Rivers. The jurisdiction of North Carolina was in 1777 extended over the Western District, which was organized as the county of Washington, and extending westward to the Mississippi River. Soon after, some of the more daring pioneers made a settlement at Bledsoe’s Station, in Middle Tennessee, in the heart of the Chickasaw nation, and separated several hundred miles, by the usually traveled route, from their kinsmen on the Holstein.

A number of French traders had previously established a trading post and erected a few cabins at the “Bluff” near the site of Nashville. To the same vicinity Colonel James Robertson, in the fall of 1780, emigrated with 40  families from North Carolina, who were driven from their homes by the marauding incursions of Tarleton’s cavalry, and established “Robertson’s Station,” which formed the nucleus around which gathered the settlements on the Cumberland. The Cherokee having commenced hostilities upon the frontier inhabitants about the commencement of the year 1781, Colonel Campbell, of Virginia, with 700 mounted riflemen, invaded their country and defeated them. At the close of the American Revolution, settlers moved in large numbers from Virginia, North and South Carolina and Georgia. Nashville was laid out in the summer of 1784, and named from General Francis Nash, who fell at Brandywine.

The people of this district, in common with those of Kentucky, and on the tipper Ohio River, were deeply interested in the navigation of the Mississippi River, and under the tempting offers of the Spanish governor of Louisiana, many were lured to emigrate to West Florida and become subjects of the Spanish.

North Carolina, having ceded her claims to her western lands, Congress, in May 1790, erected this into a territory under the name of the “Southwestern Territory,” according to the provisions of the ordinance of 1787, excepting the article prohibiting slavery.

The territorial government was organized with a legislature, a legislative council, with William Blount as their first governor. Knoxville was made the seat of government. A fort was erected to intimidate the Indians, by the United States, in the Indian country, on the site of Kingston. From this period until the final overthrow of the northwestern Indians by Wayne, this territory suffered from the hostilities of the Creek and Cherokee, who were secretly supplied with arms and ammunition by the Spanish agents, with the hope that they would exterminate the Cumberland settlements. In 1795 the territory contained a population of 27,262, of whom about 10,000 were slaves. On June 1, 1796, it was admitted into the Union as the State of Tennessee.

By the treaty of October 27th, 1795, with Spain, the old sore, the right of navigating the Mississippi River, was closed, that power ceding to the United States the right of free navigation.