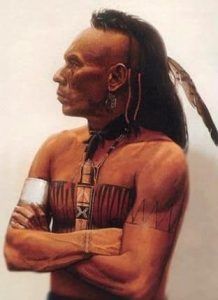 In the summer of 1774, several other parties of surveyors and hunters entered Kentucky, and James Harrod erected a dwelling, on or near the site of Harrodsburg, around which afterward arose “Harrod Station.” In the year 1775, Colonel Richard Henderson, a native of North Carolina, in behalf of himself and his associates, purchased of the Cherokee all the country lying between the Cumberland River and Cumberland Mountains and Kentucky River, and south of the Ohio River, which now comprises more than half of the State of Kentucky. The new country he named Transylvania. The first legislature sat at Boonsborough, and formed an independent government, on liberal and rational principles. Henderson was very active in granting lands to new settlers. The legislature of Virginia subsequently crushed his schemes, claiming the sole right to purchase lands from the Indians, and declared his purchase null and void. But, as some compensation for the services rendered in opening the wilderness, the legislature granted to the proprietors a tract of land, twelve miles square, on the Ohio River, below the mouth of Green River. 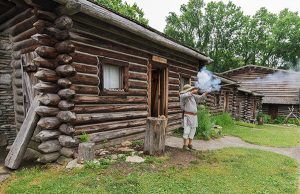 In 1775, Daniel Boone, in the employment of Henderson, laid out the town and fort afterward called Boonsborough. From this time, Boonsborough and Harrodsburg became the nucleus and support of emigration and settlement in Kentucky. In May, another fort was also built, which was under the command of Colonel Benjamin Logan, and named Logan’s Fort. It stood on the site of Stanford, in Lincoln County, and became an important post.

In 1776, the jurisdiction of Virginia was formally extended over the colony of Transylvania, which was organized into a county named Kentucky, and the first court was held at Harrodsburg in the spring of 1787. At this time, the American Revolution was in full progress, and the early settlers of Kentucky were particularly exposed to the incursions of the Indian allies of Great Britain. The early French settlements in the Illinois country now being in possession of that power, formed important points around which the British assembled the Indians and instigated them to murderous incursions against the pioneer population.

The year 1779 was marked, in Kentucky, by the passage of the Virginia Land Laws. At this time, there existed claims of various kinds, to the western lands. Commissioners were appointed to examine and give judgment upon these various claims as they might be presented. These having been provided for, the residue of the rich lands of Kentucky was in the market. As a consequence of the passage of these laws, a vast number of emigrants crossed the mountains into Kentucky to locate land warrants: and in the years 1779-80 and 1781, the great and absorbing topic in Kentucky was to enter survey and obtain patents for the richest lands, and this, too, in the face of all the horrors and dangers of an Indian war.

Although the main features of the Virginia land laws were just and liberal, a great defect existed in their not providing for a general survey of the country by the parent state, and its subdivision into sections and parts of lections. Each warrant-holder being required to make his own survey, and having the privilege of locating according to his pleasure, interminable confusion arose from want of precision in the boundaries. In unskillful hands, entries, surveys, and patents were piled upon each other, overlapping and crossing in inextricable confusion; hence, when the country became densely populated, arose vexatious lawsuits and perplexities. Such men as Simon Kenton and Daniel Boone, who had done so much for the welfare of Kentucky in its early days of trial, found their indefinite entries declared null and void, and were dispossessed, in their old age, of any claim upon that soil for which they had periled their all. 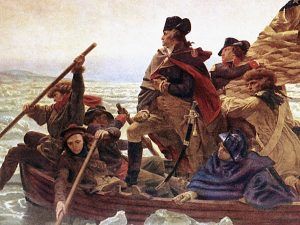 The close of the American Revolution, for a time only, suspended Indian hostilities, when the Indian war was again carried on with renewed energy. This arose from the failure of both countries from fully executing the terms of the treaty. By it, England was obligated to surrender the northwestern posts within the boundaries of the Union and to return slaves taken during the war. The United States, on their part, had agreed to offer no legal obstacles to the collection of debts due from her citizens to those of Great Britain. Virginia, indignant at the removal of her slaves by the British fleet, by law, prohibited the collection of British debts, while England, in consequence, refused to deliver up the posts, so that they were held by her more than ten years until Jay’s Treaty was concluded.

Settlements rapidly advanced. Simon Kenton having, in 1784, erected a block-house on the site of Maysville, — then called Limestone — that became the point from whence the stream of emigration, from down its way on the Ohio River, turned into the interior.

In the spring of 1783, the first court in Kentucky was held at Harrodsburg. At this period, the establishment of a government, independent of Virginia, appeared to be of paramount necessity, in consequence of troubles with the Indians. For this object, the first convention in Kentucky was held at Danville, in December 1784; but, it was not consummated until eight separate conventions had been held, running through a term of six years. The last was assembled in July 1790; on the 4th of February, 1791, Congress passed the act admitting Kentucky into the Union, and in the April following, she adopted a State Constitution.

Prior to this, unfavorable impressions prevailed in Kentucky against the Union, in consequence of the inability of Congress to compel a surrender of the northwest posts, and the apparent disposition of the northern States to yield to Spain, for twenty years, the sole right to navigate the Mississippi River to the Gulf of Mexico, the exclusive right to which was claimed by that power, it being within her dominions. Kentucky was suffering under the horrors of Indian warfare, and having no government of her own, saw that which was beyond the mountains was unable to afford them protection. When, in the year 1786, several States in Congress showed a disposition to yield the right of navigating the Mississippi River to Spain for certain commercial advantages, which would inure to their benefit, but, not in the least to that of Kentucky, there arose a universal voice of dissatisfaction; and many were in favor of declaring the independence of Kentucky and erecting an independent government west of the mountains.

Spain was then an immense land-holder in the west. She claimed all east of the Mississippi River lying south of the 31st degree of north latitude, and all west of that river to the ocean.

In May 1787, a convention was assembled at Danville to remonstrate with Congress against the proposition of ceding the navigation of the Mississippi River to Spain; but it having been ascertained that Congress, through the influence of Virginia and the other southern States, would not permit this, the convention had no occasion to act upon the subject. 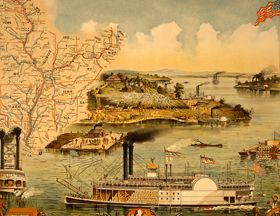 In the year 1787, quite a sensation arose in Kentucky in consequence of a profitable trade having been opened with New Orleans by General James  Wilkinson, who descended thither in June, with a boatload of tobacco and other productions of Kentucky. Previously, all those who ventured down the river within the Spanish settlements, had their property seized. The lure was then held out by the Spanish Minister, that if Kentucky would declare her independence of the United States, the navigation of the Mississippi River should be opened to her; but that, never would this privilege be extended while she was a part of the Union, in consequence of existing commercial treaties between Spain and other European powers.

In the winter of 1788-99, the notorious Dr. John Connolly, a secret British agent from Canada, arrived in Kentucky. His object appeared to be to sound the temper of her people and ascertain if they were willing to unite with British troops from Canada, and seize upon and hold New Orleans and the Spanish settlements on the Mississippi River. He dwelt upon the advantages which it must be to the people of the west to hold and possess the right of navigating the Mississippi River, but his overtures were not accepted.

At this time, settlements had been commenced within the present limits of Ohio. Before giving a sketch of these, we glance at the western land claims.

The claim of the English monarch to the Northwestern Territory was ceded to the United States by the treaty of peace, signed at Paris on September 3, 1783. During the pendency of this negotiation, Mr. Oswald, the British commissioner, proposed the Ohio River as the western boundary of the United States, and, but for the indomitable persevering opposition of John Adams, one of the American commissioners, who insisted upon the Mississippi River as the boundary, this proposition would have probably been acceded to.

The States who owned western un-appropriated lands under their original charters from British monarchs, with a single exception, ceded them to the United States. In March 1784, Virginia ceded the soil and jurisdiction of her lands northwest of the Ohio River. In September 1786, Connecticut ceded her claim to the soil and jurisdiction of her western lands, excepting that part of Ohio River known as the “Western Reserve,” and to that she ceded her jurisdictional claims in 1800. Massachusetts and New York ceded all their claims. Beside these were the Indian claims asserted by the right of possession. These have been extinguished by various treaties, from time to time, as the inroads of emigration rendered necessary.